PSNI: Leak of bonfire contractor names unlikely to have come from police 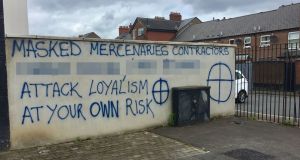 A leak that led to the names of contractors appearing in sinister graffiti warning against demolishing a contentious loyalist bonfire was “highly unlikely” to have come from within the police, a senior officer has said.

The stand-off over the bonfire built in the car park of Avoniel Leisure Centre in east Belfast ended on Thursday after councillors backed down over plans to demolish it.

Belfast City Council abandoned an attempt to remove the structure when its hired private contractor pulled out of the job after menacing graffiti threats were daubed on walls close to the site purporting to identify the company.

As part of the fallout from the episode, the council has asked police to investigate how closely-guarded details around contractors came into the public domain.

PSNI sssistant chief Constable Barbara Gray was asked at a press briefing on Friday whether there are suspicions the leak came from within the force.

She said: “It is highly unlikely that that happened, but if that is the case at any point that absolutely will be the subject and matter of investigation by the Police Ombudsman and that will be within their remit.”

Ms Gray was pressed whether it would be more appropriate for an outside police force to take on the investigation if any suspicion of PSNI involvement exists. She insisted that is the ombudsman’s role.

The Avoniel bonfire was lit on Thursday night along with scores of others across the region as loyalists ushered in the main date in the Protestant loyal order parading season — the Twelfth of July.

There was some disorder in Belfast, but not on a scale witnessed in previous years.

Police officers came under attack from petrol bombs at a community interface area in north Belfast.

Two youths were arrested in the nationalist Springfield Road.

A man has also been charged in relation to the placement of offensive items, namely election material, on a bonfire in Lisburn.

The 52-year-old is charged with a number of offences, including criminal damage, and is due to appear at Lisburn Magistrates’ Court next month.

Bonfire builders have faced criticism in the past for placing election posters belonging to nationalist and republican politicians on the fires and burning them.

Ms Gray said: “I am relieved that over the past 24 hours we haven’t seen a repeat of the violence we witnessed on our streets this time last year.”

In an apparent reference to the stand-off over the Avoniel bonfire in Belfast, Ms Gray added: “There is absolutely no doubt that there has been challenges over the last week, not just for us as a police service but for other public services.”

Before the council reversed its decision to intervene to remove the controversial fire, police had warned sending in contractors, escorted by its officers, could have prompted serious disorder orchestrated by the East Belfast grouping of the paramilitary Ulster Volunteer Force (UVF), with the risk of gun violence.

On Friday, Ms Gray said: “I have no doubt that at Avoniel there was influence from east Belfast UVF, I have absolutely no doubt about that.”

She insisted police had been “ready to go” and escort contractors into the site before the company pulled out of its arrangement with the council.

The council has urged police to pursue bonfire builders for trespassing on the Avoniel site.

Asked why police did not move against anyone for aggravated trespass prior to the fire being lit, Ms Gray said: “We have no powers to remove anybody.”

She said police had to comply with “complex legislation” and had undertaken evidence-gathering at the site.

The officer added that any police action also has to be “proportionate”.

On the bonfire disputes which recur on an annual basis in Northern Ireland, Ms Gray added: “None of this is easy and the resolution to these challenging issues does not rest with the police.” – PA

Coronavirus: 20km travel limit may be scrapped early as Ireland moves to exit lockdown 09:22
‘Up to 40%’ of close contacts of meat plant workers with Covid not traced 09:21
Gerry Adams asks Irish-Americans to lobby for unity referendum 09:06
More than 200 Syrians cleared to travel to Ireland once restrictions lifted 07:53
Individual government deals on the table for regional Independent TDs 06:22