From Malta with love: two former cadets hatched a plan while training in Ireland 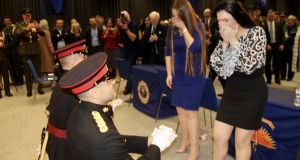 Two Maltese officer-cadets sprung surprise proposals on their partners at their commissioning ceremony in Dublin on Thursday.

The commissioning ceremony for the Cadet School has changed little since it was introduced in 1929.

Each officer-cadet is called by name, the oath of commissioning is read and sworn by the cadets. They then received their sword and rank markings followed by their commission parchment.

Thursday’s ceremony at Dublin Castle was distinguished by being the biggest in the history of the State with 91 cadets becoming commissioned officers. It included nine women cadets.

It was also only the third to be held in Dublin Castle, once the seat of British rule in Ireland and the place where power was handed over from the British authorities to the Irish in January 1922.

The class of 2019/20 included six Maltese recruits who had trained at the Cadet School in the Curragh.

Their now fiancées, Nadesh Barbara (27) and Amy Zammit (20) said yes, fortunately for the men involved, and both were in tears and shaking at the end of it.

The proposal was watched by Second Lieutenant Spiteri and Ms Barbara’s son Lydon.

“We thought about it two months ago and we said, ‘why not?’ I’ve been with Nadesh now for eight years so it was time,” said a clearly delighted and relieved Second Lieutenant Spiteri.

The happy couples were flying back to Malta on Wednesday following the completion of the 15-month cadet course. It wasn’t easy, Lieutenant Spiteri, admitted training outdoors in a wet and cold county like Ireland when you come from a sunny Mediterranean island like Malta.

It was a proud day for Lieutenant Robert Sheehan (24) from Cork city, the fourth generation of his family to serve in the Defence Forces going back to his grandfather Timmy who had been in the old IRA a century ago.

Robert’s father Patrick Sheehan is a retired captain and his grandfather Tom Sheehan a retired commandant from the Irish army. Both were present in Dublin Castle.

“They were a big influence in joining. I was always interested from an early age. I hope to serve overseas in a year or two,” said Robert.

“Every day is different. You’re never stuck behind a desk. You’re out and about. You are encouraged to stay fit.”

Lieutenant Turlough Gallagher (28) from Tattyreach, Co Tyrone received the claidheamh gasciochta - the “hero’s sword” for coming top of his class.

Minister for Defence Paul Kehoe could not be there because of Dáil commitments. Instead his speech was read on his behalf by the Secretary General of the Department of Defence Maurice Quinn.

In the speech, Mr Kehoe acknowledged that “there was no quick fix” regarding the issues of recruitment and retention in the Defence Forces.

He said the Government had already provided €10 million to deal with the pay issue which was a priority.

He acknowledged that many Defence Forces across Europe had trouble recruiting because of full employment in many economies including Ireland’s.