Royal visit: William and Kate to visit Meath and Kildare

Britain's Duke and Duchess of Cambridge continued their official visit to Ireland which included a walk along the Howth cliffs in Dublin and a visit to Jigsaw, a organisation providing youth mental health services in the capital's city centre. 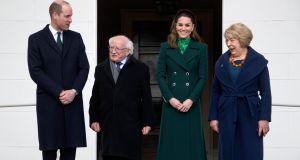 President Michael D. Higgins and his wife Sabina are pictured with William and Kate, the Duke and Duchess of Cambridge, to Áras an Uachtaráin on Tuesday. Photograph: Colin Keegan/Collins.

The only full day of the official Irish visit by Britain’s Duke and Duchess of Cambridge to Ireland will see the royal couple making multiple stops in Dublin, Kildare and Meath before heading west to Galway.

The pair arrived in Dublin on Tuesday for a three-day visit to Ireland, their first official visit to the State.

Prince William and Kate Middleton on Wednesday visited the mental health charity Jigsaw in Temple Bar and were due to travel to the town of Prosperous, Co Kildare, to see a youth programme called Extern.

The royal couple discussed mental health and youth participation with the young people involved with Jigsaw.

The couple then took a walk down the lane of love in Dublin’s Temple Bar to look at the street art that lines the walls.

Speaking after the visit, Ewan McGrane (17) said it was “unbelievable” to meet Prince William and Kate Middleton.

“They were incredible. It was quite an experience. We talked about youth mental health and the importance of it. We were surpised that they wanted to meet us so this is amazing,” he said.

“It was very secretive at first. We knew people were coming, but we weren’t even told who. It was only a few days ago when we were officially told.”

Jesse Dent Gallagher (18) said the discussion with the royals was “shockingly normal”.

“You could tell they were actually interested in what we had to say. They were really getting engaged with us, and making sure we all had a chance to speak. It’s wonderful watching the organisation grow and seeing it capture the attention of people like the royals.”

He hopes that now that “very influential people” have taken a public interest in mental health, it will encourage more people to take it seriously.

Abigail McDonnell, a member of the youth advisory panel, said it was a “whirlwind” morning.

“It was a very, very surreal experience. It’s going to take me a few days to digest the fact that I just shook Kate’s hands,” she said. “They were very, very casual and that definitely put us all at ease.”

In the afternoon, the Duke and Duchess are due to return to Dublin to visit the Howth Marine Institute before moving on to Co Meath for a tour of the Teagasc Animal and Grassland Research and Innovation centre in Grange.

Also on the schedule is a visit to the Museum of Literature Ireland on St Stephen’s Green in Dublin.

After that the royal couple will head west to Galway ahead of a walkabout in the city centre and a visit to a local GAA club tomorrow morning.

The couple met President Michael D Higgins and the Taoiseach, Leo Varadkar, on Tuesday and visited the Garden of Remembrance. They rounded out their day with a visit to the Guinness Storehouse before spending the night in Farmleigh House in the Phoenix Park.

The couple talked about the UK’s decision to leave the EU during a meeting with the President and his wife, Sabina, and spoke about building on the foundations of the Belfast Agreement that ushered in peace in Northern Ireland.

During a visit to Dublin’s Garden of Remembrance, the couple called for a “brighter future” in a handwritten note left with a wreath.