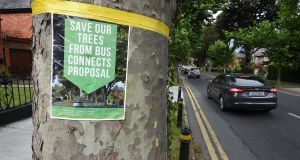 Almost 2,500 trees are to be felled to cater for proposed bus corridors in Dublin under the latest BusConnects plans.

The plans would see 776 properties lose part of their front gardens and 2,449 trees removed.

However, the National Transport Authority (NTA) has said the overall number of trees impacted by the revised proposals is “significantly less than the original plans, particularly in relation to larger, mature trees”.

“The original brochures recorded the number of roadside trees impacted as full mapping surveys hadn’t been completed at that stage. That number was approximately 1,500,” an NTA spokeswoman said.

“Mapping surveys have now been largely completed, and the total number of trees, both roadside trees and off-road trees, impacted by the revised proposals is approximately 2,500 trees. Most of the off-road trees are smaller, more recently planted trees. The replanting scheme will see more trees replanted than the number removed.”

The Greenhills-to-city-centre route would see the largest number of properties affected (120) followed by Clongriffin to city centre (118).

The NTA said the revised proposals were aimed at minimising the impact on properties and trees and include new one-way systems, the introduction of signal controlled priority and bus gates.

Around13,000 submissions were received during the last round of public consultation on the bus corridor project, with the largest number (2,760) of those were in relation to the Rathfarnam-to-city-centre corridor.

Public consultation on the revised bus corridor proposals runs until April 17th. A series of information events will be hosted by the NTA during March.

The NTA said in parallel with public consultation, “work is ongoing on developing the technical, environmental, and transport impact assessment reports necessary for submission of a planning application for each corridor to An Bord Pleanála”.

Final plans are due to be presented to An Bord Pleanála for statutory approval at end of this year.

BusConnects aims to overhaul the bus system in the Dublin region by creating 230km of dedicated bus lanes and 200km of cycle tracks along 16 of the busiest corridors and a redesign of the network. The NTA said the plans would result in journey time savings of up to 40 to 50 per cent on the corridors.

The final network plan is due to be published this summer, and work will start in early 2021 over a phased three-year period.