Coronavirus: Ex-Italian PM given all-clear to participate in Dublin conference 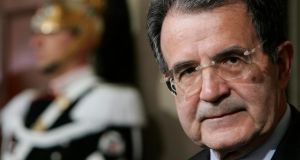 Former Italian prime minister Romano Prodi has been given the all-clear to participate in a public conference at Trinity College Dublin after travelling from a coronavirus-hit region of Italy.

Mr Prodi arrived hours before Irish people were cautioned against non-essential travel to parts of Italy to prevent the spread of Covid-19 from Europe’s hardest-hit country.

The former president of the European Commission is due to speak at a conference entitled Europe and the Future, which is hosted by the university’s debating society, the College Historical Society, and the Institute of International and European Affairs (IIEA).

Organisers assessed whether Mr Prodi’s attendance at the event, which is expected to draw a large attendance, should proceed in light of the travel advisory from Department of Foreign Affairs regarding four regions in Italy.

After consulting with Trinity College, the IIEA said it had taken the university’s guidance on the matter and that the event would be proceeding as planned with Mr Prodi speaking.

“Trinity College is sticking to Government guidelines. At present, those guidelines do not include any restrictions on Italians travelling to Ireland or moving around the country. For this reason, they have advised there will be no restrictions in place at Trinity today,” said a spokesman for the IIEA.

The event is taking place as part of a week-long commemoration marking the 250th anniversary of “the Hist” and was open to members of the public who registered online to attend.

Mr Prodi travelled into Dublin on Tuesday afternoon from Bologna, the capital of the Emilia-Romagna area, via Munich in Germany, according to a spokesman for the IIEA.

The two cases of coronavirus identified in the Republic of Ireland so far have been individuals who have returned to the country after travelling to Italy.

The Department of Foreign Affairs on Tuesday night advised the Irish public against non-essential travel to the Emilia-Romagna and three other regions in northern Italy badly affected by the virus after the second case was confirmed.

“We have been closely monitoring the advice of the HSE and Trinity College’s dedicated coronavirus unit and we have been in continual consultation with the Italian embassy in Dublin,” said the IIEA spokesman.

“Following all advice available to use, and in consultation with the Hist and Trinity’s chief medical officer, we decided to continue with the event as foreseen.”

Mr Prodi is one of a panel of speakers at the event where Taoiseach Leo Varadkar will deliver the opening address. Other speakers include former European Commission president Herman Van Rompuy, former EU secretary-general Catherine Day, former EU ambassador to the US David O’Sullivan and Tony Barber, Europe Editor of The Financial Times.

Another former European Commission president José Manuel Barroso was due to speak but he cancelled his appearance due to travel advice relating to the coronavirus.

Italy, the European country worst affected by the outbreak, is struggling to contain the spread of the illness with the death toll rising to 79 and the total number of cases reaching 2,502 on Monday.

The country’s health authorities are considering setting up a new quarantine red zone to try to contain the virus that is spreading from the wealthy northern regions of Lombardy, Veneto and Emilia-Romagna to the south.