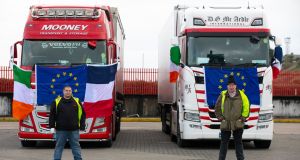 A new ferry service direct from Rosslare to Dunkirk set sail for the first time on Saturday afternoon.

For Pedro Ferreira it was a relief.

Having enduring long waits on the UK landbridge in recent weeks, the Spanish haulier welcomed the new direct route to the continent.

“We always used [the] landbridge,” he said. “But Dover was a nightmare – six to eight miles of queues, no bathrooms. You could be stuck six to 10 hours on the side of the road and there’s nothing you could do about it.”

Danish shipping line DFDS launched the route to Dunkirk in northern France with Brexit in mind, allowing hauliers to avoid congestion and paperwork on the landbridge from Saturday. The first ship was carrying almost 100 trucks and trailers to Dunkirk, and the service will operate six days a week. A second DFDS ferry was set to leave Rosslare later on Saturday.

Ferreira was carrying a “mix of everything” for Mooney Transport, while, beside him, John Carroll was bringing pharmaceuticals on board for DG McArdle. Both had their lorries draped in Irish, French and EU flags and would often have used Dublin Port prior to now.

Carroll, who was on his way to Holland after Dunkirk, was exasperated at the conditions drivers faced when going through the UK in recent times: “You’d come off the boat on a Tuesday evening and all you could see was miles and miles of traffic. And no facilities of any description.”

“Anything’s better than sitting in a queue,” agreed Ray Johnson. The Belfast man was coming from Dublin and said early promises to cater for drivers fell away, meaning they now need direct routes to the continent. “I was caught sitting for up to three days before. We were the frontline workers for a day or two but they just didn’t care after that.”

It was Tom Birmingham’s first time using Rosslare Europort, with the Dubliner having always used the port in the capital. “This is less hassle really for the driver. I’m heading to Germany and then Holland and, and this will leave us with more driving hours when we get off. It’s going to be good.”

DFDS opened the route out of a belief that the landbridge would be “clogged” once the Brexit deadline passed. Brexit “accelerated” plans for the route, said Darren Mooney, commercial director for DFDS, who was beaming to see trucks queueing up for the first ship.

“There’s been a whole year’s work put into this and it’s brilliant to see it all manifest here in Rosslare,” he said.

The company believes the route will be popular as it will allow direct access to northern and central Europe.

“It’s massively exciting to see this,” said Glenn Carr, manager of Rosslare Europort. “All in all today, we will move more freight on this day alone through the port of Rosslare to mainland Europe than we did for the whole of week one in 2020.”

With Stena Line also adding a ship to its current service, one leaving on Saturday, it means there will be 15 crossings to the continent every week, plus 15 return journeys. Carr said it represented a near-tripling of routes for drivers.

“It demonstrates the shift happening away from the landbridge. The three services going out today is a testament to the interest and capacity that’s there. All three are fully booked.”

US company Amazon had sought to book the whole ship but were turned down to accommodate others. They were granted more than 10 per cent space in the end. DFDS declined to comment.

Declan Cleary, sales manager for the company, said there had been strong demand for the route, demonstrated by DFDS starting with three ships.

His pitch to transport companies had been to give them “for the first time a solution to Brexit”, he says.

“There’s now a port to focus on outside of Dublin. This distance to drive down to Rosslare is well worth their time because they avoid the extra costs and time delays they’d experience going through the UK.”

The small management team burst into applause after the departing ship sounded its horn.

It was a case of history repeating itself for Cleary, who stood in much the same spot watching the first freight ship set sail from Rosslare to Cherbourg. “I think I still have a picture of trucks heading onto the ferry from that day somewhere in my attic.”