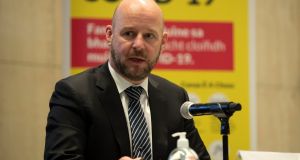 Prof Philip Nolan, chair of the Nphet Irish Epidemiological Modelling Advisory Group said the fundamental message was for people to stay at home and restrict movements ‘as much as we did in March and April to turn this tide’. Photograph: Colin Keegan/Collins Dublin

A further 3,394 cases of Covid-19 were reported on Saturday, almost double the highest number of cases previously recorded in one day in the Republic since the pandemic began.

There are now 607 Covid-19 patients in hospital, of which 56 are in ICU. Nphet said there were 71 people admitted to hospital with the virus in the past 24 hours.

Chief medical officer Dr Tony Holohan said the incidence rate of Covid-19 was as high, if not higher now than it was in March.

“Every individual needs to act as if they are infectious. Hospitalisations are rising to levels close to what we saw in the springtime. Everyone needs to stay at home other than for essential work or care,” he said.

“It is really important that vulnerable and older people do not leave their homes unless absolutely essential. This includes asking neighbours or family to carry out errands such as grocery shopping, limiting all contacts to only those people you live with or have to visit for essential care reasons.”

Dr Holohan added that “we need to rediscover the spirit of solidarity and community we saw in March and April so that we can all do our part in protecting older and vulnerable people”.

Some 65 per cent of cases are aged under 45 years while the media age is 35 years old.

Saturday’s figures followed a warning from the chair of the National Public Health Emergency Team’s modelling advisory group that there could be up to 6,000 Covid-19 cases a day reported at the peak of the current surge.

Prof Philip Nolan warned that “we need to prepare ourselves for some really quite worrying numbers in the coming days both in case numbers and in the hospital system”.

"The incidence of #COVID19 is as high, if not higher now than it was in March. Hospitalisations are rising to levels close to what we saw in the springtime.
Everyone needs to #StayHome other than for essential work or care." @CMOIreland

He told RTÉ’s Radio 1 on Saturday there could be “anywhere between 3,000 and 6,000” cases at the peak of the current surge and that Saturday’s figures would include some of the 9,000 delayed cases that were flagged by Nphet this week.

Referring to data from Nphet on New Year’s Day that showed 1,754 daily new cases, Dr Doyle said a further 5,573 positive swabs the same day had yet to be verified due to a backlog.

Official figures are “stalling around the 1,700 mark”, she said, because the case management system can only deal with so many new cases, meaning Ireland has no “real time statistics about what is actually happening on the ground”.

Prof Nolan told Saturday with Katie Hannon the Health Protection Surveillance Centre (HPSC) and other public health officials had been working in recent days “to add in features to the IT system to allow it to cope with those very high volumes” and expected the issue to be resolved within the next five to seven days.

He said cases being reported now would be comparable to a reproduction number of 1.8 to 2, but that a formal estimate would not be available until next week.

Prof Nolan said in the run-up to Christmas, 15,000 people were being referred for tests and fewer than 1,000 of those came back positive. He said this then dropped to fewer than 4,000 tests a day with a few hundred of those positive.

He said delayed presentations and the level of socialisation that occurred prior to and over Christmas had led to an increase in cases.

“We saw an even more intense level of socialisation and viral transmission over Christmas than we might have expected and that’s what’s leading us to the really precarious position that we’re in now,” he said.

Prof Nolan said that by all indicators “we are in a very significant surge” of the disease and the fundamental message was for people to stay at home and restrict movements “as much as we did in March and April to turn this tide”.

He said the South African variant, which is believed to be even more transmissible than that found in the UK, had not been detected in Ireland yet.

Nine more cases of the strain of Covid-19 first discovered in Britain have been detected in the Republic.

He said this brought the total number of cases identified by the laboratory to 16, out of 169 tested to date.

Dr De Gascun said on Twitter the small number of cases identified would suggest that the UK variant, “at a proportion of less than 10 per cent”, was not responsible for the recent “significant and concerning” increase in coronavirus case numbers.

His comments come amid ongoing concern over the rapid rise in the level of coronavirus infections across the State and fears over the knock-on impact on the health service.

On Saturday morning, HSE chief executive Paul Reid said 581 patients were in hospital with Covid-19, an increase of 51 on 8pm on Friday night. He said 50 were in intensive care. Mr Reid said on Twitter: “We have likely not seen the worst impacts yet. But everything we do today to stop this virus spreading makes a huge difference.”

HSE chief clinical officer Dr Colm Henry told The Irish Times on Friday that measures to control the virus were impacting the hospital sector already. “There are over 400 beds out of commission in recent days,” he said, due to infection-prevention measures “related in many cases to Covid-19 and, secondly, inability to staff beds” because staff have Covid-19 or are deemed a close contact.

Chief medical officer Dr Tony Holohan said: “Our health system will not continue to cope with this level of impact.”

Meanwhile, the State is to examine if the period between the two required doses of Covid-19 vaccinations could be extended in order to accelerate the rollout, as is being done in the United Kingdom.

Prof Brian MacCraith, chair of the State’s Covid-19 taskforce, said the issue of increasing the gap between vaccine doses had been discussed by the group in recent days.

“On foot of our discussions, a formal request has been issued from [Dr Holohan] to request [the National Immunisation Advisory Committee] explore the issue and provide some guidance on the matter.

“Given that we want to be as ambitious and effective as possible, and given the backdrop of rapidly rising numbers and our prioritised focus on the vulnerable in nursing homes and frontline healthcare workers, we have to consider all options,” he said.