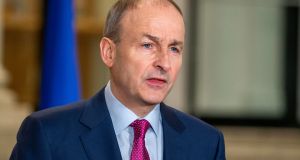 Taoiseach Micheál Martin: ‘Of course we should know who has murdered a child – in certain circumstances it is essential.’ Photograph: Julien Behal/PA Wire

A legal ban on reporting the identity of murdered children in Ireland must be changed to ensure transparency, the Taoiseach has said.

A landmark decision by the Court of Appeal in October last year ruled that provisions within the 2001 Children Act that prevent the identification of a child when someone is charged with an offence against them do not exclude children who are deceased.

The ruling marked a significant departure from established media reporting practices in the state.

It means child murder victims can no longer be named when someone is charged with the crime.

Changing the position would require an amendment to the Children Act.

“I know the attorney general is working on that with the Minister for Justice,” he said.

“It has to be changed and we will. The specific nature of how we do it, we will have to wait to see the detail of that.”

Asked why it was important to allow children who had been killed to be identified, the Taoiseach added: “I think it’s important in terms of ... I believe in transparency on issues like that.

“Of course we should know who has murdered a child – in certain circumstances it is essential.” – PA