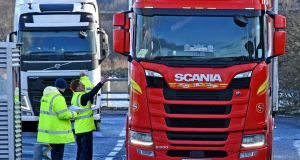 The first lorry disembarks on New Year’s Day from the first Cairnryan to Belfast Stenna Line ferry to dock after the end of the Brexit transition period. Photograph: Alan Lewis/Photopress

The first checks have taken place on goods arriving in Northern Ireland from Great Britain following the end of the Brexit transition period.

Seamus Leheny, policy manager with hauliers’ representative body Logistics UK, said there had been a few “teething problems” but several factors including the low volume of freight had helped prevent delays.

“It’s New Year’s Day, it’s very light flows [of freight] at the moment. There’s been a lot of stockpiling happening in the last few weeks and a lot of people have taken a step back to see how it goes and if the system’s holding up,” he said.

Under the terms of the Northern Ireland protocol, which came into force at 11pm on Thursday, there is now a customs and regulatory border in the Irish Sea.

In order to avoid a hard border on the island of Ireland, the EU and the UK agreed that the North remains part of the EU single market for goods and must apply EU customs rules at its ports and airports. Customs declarations and additional checks, particularly for agri-food products, are now required for goods arriving in Northern Ireland from Great Britain.

Concerns have been raised over potential delays at Northern Ireland’s ports, as well as the impact of the Irish Sea Border on the delivery of food and other goods, including those purchased online. However some temporary “grace periods” have been agreed which will reduce the amount of paperwork and ease the transition in the first few months.

The first ferry to arrive in Northern Ireland from the Scottish port of Cairnryan docked in Belfast just before 2pm on New Year’s Day.

The 15 lorries aboard were met by officials from UK Border Force and the North’s Department of Agriculture.

The paperwork was “very admin heavy”, said Mr Leheny. “Between 20-30 minutes to do a [customs] declaration and the software’s a bit clunky, so it’s not easy to do.”

He said that six of the lorries, which were all carrying food, had been selected to go to an initial Border Control Post where they were “averaging a 10-15 minute hold-up”.

Two of the lorries were sent for inspection to another facility. “They were detained a good bit longer and one is still there two hours later,” said Mr Leheny on Friday afternoon.

He said he understood the delays were due to “misunderstandings with regard to the formalities . . . we’re currently trying to get those resolved, but it’s to be expected that at the start there will be some issues. The volume [of freight] is very low, so it won’t be until Monday or Tuesday of next week that we see what the real situation is like.”

He described his outlook as “cautious”, adding that it is key that “IT systems hold up, that the initial problems we’re seeing with sanitary and phyto-sanitary [checks] today are ironed out, because we can’t afford that. And that’s where the real delays will take place.

Mr Leheny said he understood that one lorry had been unable to board a ferry in Cairnryan last night because the supplier in Great Britain did not have the correct paperwork.

P&O, which owns the port of Cairnryan, declined to comment when contacted by The Irish Times.