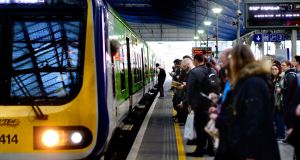 “This dispute could escalate beyond the five strike days already planned unless a serious attempt is made to engage meaningfully with unions.” Photograph: Cyril Byrne

As tens of thousands of rail passengers face disruption as a result of the first of a series of rail strikes, the Minster for Transport Shane Ross has urged all parties in the dispute to engage in constructive and realistic negotiations.

Rail services across the country will be at a standstill on Wednesday as nearly 4,000 staff at Iarnród Éireann strike over pay.

Unions representing workers at the State-owned company have warned that while five days of strikes are already scheduled to take place in the weeks ahead, the dispute could escalate further “in the absence of meaningful engagement by management”.

Unions are seeking increases of about 3.75 per cent over three years – along the lines of the rises secured by staff in Dublin Bus and Luas after industrial action last year – without the provision of additional productivity.

In a statement on the eve of the first strike, Mr Ross said: “I sincerely call on the parties to the Iarnród Éireann pay dispute to continue to use the services of the Labour Court and the Workplace Relations Commission. It is important for the travelling public – and also for the staff and for the company itself – that public transport continues, and that the dispute is resolved in a realistic, fair and sustainable manner.”

The trade union Siptu said its members in the rail company had been left with no option, due to management intransigence, other than to take industrial action.

Siptu transport division organiser Greg Ennis said it was long past time for the Government to take its responsibilities seriously concerning the maintenance of a functioning rail network .

The National Bus and Rail Union (NBRU) accused the Department of Transport and Iarnród Éireann of “colluding against staff at the company in their pursuance of a long-overdue and well deserved pay-rise”.

NBRU general secretary Dermot O’Leary said: “It is now quite obvious to those of us that represent frontline transport workers, that there is an axis of collusion between department officials and the various transport companies with regard to resisting the genuine pay claims of workers who have gone long periods – 10 years in the case of Iarnród Éireann – without a pay rise.”

The trade union Unite said neither management nor Mr Ross “should be in any doubt that this dispute could escalate beyond the five strike days already planned unless a serious attempt is made to engage meaningfully with unions”.

“Workers in Iarnród Éireann have reached the end of their patience. Following a pay freeze lasting nearly 10 years, the final straw was the breakdown of talks at the Workplace Relations Commission on October 19th – a breakdown which, in the unions’ view, was orchestrated by forces outside the negotiations.”

Iarnród Éireann warned that the strikes would disrupt its customers and that uncertainty over a prolonged period would lose business for the company.

It said employees would lose pay for days of industrial action while the company’s precarious financial position would be further weakened and its ability to address staff pay claims reduced.

The rail company said it had accumulated losses of nearly €160 million. It previously told the Labour Court last summer that if it was to agree to pay increases being sought by staff, it would “effectively be trading recklessly”.