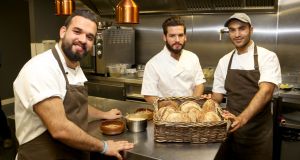 The last time was 2013 in the Syrian capital Damascus, where many had died and thousands had been wounded in the harrowing civil war.

Four years later, having been forced to flee their homes to escape military recruitment, the Orabi brothers and Marai found themselves in the kitchen of Michelin-starred restaurant Loam in Galway.

The three men are participants in a resettlement scheme run through the UN High Commission for Refugees (UNHCR). They arrived in Ireland a month ago after enduring what they recalled as much hardship in a Greek refugee camp. The three are part of a group now being accommodated in Clonea Strand Hotel in Co Waterford.

“We’ve been cooking in Clonea, and all we want to do is get back to a kitchen,” the three explained, with assistance of Libyan-born interpreter Adil Militti.

The men expressed delight at being able to lend a hand for a night in Loam, as part of a collaboration between a group of Irish-based chefs and the UNHCR.

A Syrian specialty, zaatar, which is made with sesame seeds and olive oil, was their starter, while they also prepared chicken roasted with spices, potatoes and sauce as part of the three-course meal which was accompanied by music from Galway’s Ukelele Orchestra.

“We eat zaatar with tea at breakfast, and any time of day, and it is meant to give lots of energy,”the Syrians said through their interpreter, explaining how it is the country’s most popular food. They also made Syrian pizza breads, which Marai had sold for a euro a piece in Greece to get by.

“ We are immigrants too, but we didn’t have to seek refuge here to escape a conflict,” Murphy said, explaining that the idea for the night came about in conversation with Grey.

She is well aware of the issues around the right to work for asylum seekers, having run several “pop up” kitchens in direct provision centres.

“We were talking about how we may represent Irish food, but what about the future in a changing Ireland?”she said. “We were also talking about the shortage of chefs, and about how there are skilled chefs seeking asylum here.”

The UNHCR rowed in behind the initiative, and the meal at €120 a head sold out. All proceeds will be given to a fund that supports culinary training for asylum seekers. Galway-Mayo Institute has also offered three scholarships to people in direct provision for its culinary courses, Murphy said.

The “Far-Fetched Dinner” was the first of its type, and the UNHCR plans to seek approval from the Department of Justice for further initiatives within the direct provision system.

Enda O’Neill of UNHCR Ireland explained he had heard of the success of refugee food fairs from colleagues in France.

“There was no negative reaction to it,” he said. “In Ireland, food is such an important issue, and there are also the issues of the right to work, and the shortage of skilled chefs in the catering sector. We thought it might help to emphasise these positive aspects.”

Meanwhile, the Government’s response to the Supreme Court finding that the “absolute prohibition” on asylum seekers’ right to work here is unconstitutional is expected within the coming weeks.