Dismissed as a “dolly bird” when she first started rallying, Dubliner Rosemary Smith went on to become a racing legend in the male-dominated world of motorsport and the oldest-ever person to drive a Formula 1 car at the age of 79. 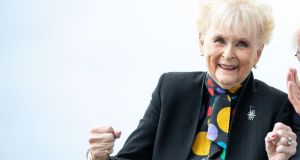 How has the world of racing changed since Rosemary Smith first got involved? “If I were doing it now, I would be on very big money. Very, very big money, if I was winning as much.” File photograph: Tom Honan

Two years ago, aged 79, Rosemary Smith was invited by Renault to do a test drive on a track near Marseilles. Upon her arrival, she noticed that all the kit and equipment had her initials on them.

“Everything had RS on it – the tyres, the big transporters, my overalls. And I thought, ‘Aren’t they really nice, doing all this just for me!’. I said to the PR man, ‘That’s wonderful that they’ve done all that’. And he looked at me pityingly and he said, ‘RS is for Renault Sport’”.

A senior moment, perhaps, but make no mistake – Smith is sharp as a tack at 82, as capable a driver now as she was when she entered her first rally back in 1961. The test drive in question saw her become the oldest-ever person to drive a Formula 1 car. She still competes in rallies, as well as giving lessons in the driving school she founded 20 years ago.

She was later told that a video of the test drive – in which she reached about 160mph – had gone viral on Facebook.

Smith says she has no time for social media or the internet: “I thought they were talking about a real virus, that I had measles or something.”

She does, however, marvel at the developments in car technology. Beat-up “bangers”, she says, are a rare sight on Irish roads these days.

‘It practically talks to me’

“The one I have outside, the Renault Megane, it practically talks to me. It’s just gorgeous. If I’m on the motorway and I’m in fifth gear and waiting to overtake someone, it’ll sort of say ‘change gear now’.”

Nevertheless, good roads and good cars do not good drivers make, she says.

“What I wanted originally, when I started the school, was a few old bangers … I would have loved to have a big enough field and old cars for the kids [to learn on]. I learned to drive on grass, with my father, and it really stood to me, especially if it was raining.

“If it started to slide or slip he would say ‘turn into it’ or ‘turn the other way. Don’t brake, sort it out’.”

How has the world of racing changed since Smith first got involved? “If I were doing it now, I would be on very big money. Very, very big money, if I was winning as much.”

Back then, she says, “We didn’t get paid … we got expenses thrown at us and when we won we got bonus money.”

Smith doesn’t go out of her way to stay healthy, but takes pride in her appearance. “I cannot go out without getting dressed up and having my hair done.”

She brandishes a perfect cerise manicure. “These are my own nails, by the way.”