Roller hockey at risk due to lack of insurance cover

Organisation, which has never had a claim, is denied cover 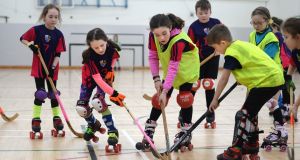 The future of roller hockey in Ireland is at risk after clubs were denied cover due to insurance companies pulling out of the Irish market, organisers have said.

According to Trish Buckley, head coach and administrator of the Irish Roller Hockey Organisation, 40 kids and 10 adults will soon be unable to play the sport unless they can source alternative cover.

The group, which has never had a claim, was previously covered by Axa XL, one of the main underwriters for the sector, which has pulled out of the Irish market.

“We’ll have to close. We’re devastated. Myself and my husband are the main trainers and we literally train every single one of them. We have invested so much in this,” Ms Buckley said.

“It’s just devastating. We told the kids and they were crying. They’re going ‘please don’t stop’. And I have to explain that it’s not up to us.”

A relatively new sport to the island of Ireland, the game involves five players per team, playing hockey while wearing quad skates.

The senior team plays internationally and won the Zaandam Cup last September and is scheduled to compete in the same cup in Amsterdam this year.

“It’s a massive sport internationally, there are players all over the world. And our little club, as small as we are, is known all over the world,” Ms Buckley said. “If this stops, it leaves the country again.”

Roller hockey is the latest leisure activity to face issues with insurance. Organisations running waterparks, adventure centres, bouncy castles and zip lining have all spoken out in the past about high premiums or being denied cover.

Peter Boland, director of the Alliance for Insurance Reform, said he was concerned about the increasing number of sectors being affected by insurance issues.

“It seems like they’re starting with the more obscure or unusual sports and then it’s going to expand to many other sports,” Mr Boland said. “Not every child wants to play GAA, or rugby or soccer.”

The Department of Finance said it acknowledged the problems being faced by some businesses, voluntary and community groups with regard to the affordability or availability of insurance.

“Unfortunately, there is no single policy or legislative ‘silver bullet’ to immediately stem or reverse premium price rises or to increase capacity in the market,” a spokesman for the department said.

The spokesman said the “single most essential challenge” that must be overcome to deal with this issue was to bring the levels of personal injury damages awarded in this country more in line with those awarded in other jurisdictions.

A report by the Department of Justice last year showed that payouts for minor ankle injuries could be up to €54,700 in the State, more than four times the UK maximum.

The Government hoped to achieve this reduction through the Judicial Council, it said.