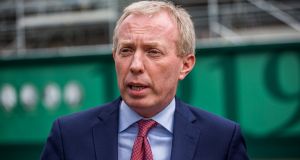 Former Fianna Fáil TD Timmy Dooley has been nominated by the Restaurants Association of Ireland to contest the upcoming Seanad election.

Mr Dooley said he had taken stock after losing his Dáil seat in Clare in the general election earlier this month and now intends to travel the country and meet with councillors in an attempt to win a Seanad seat.

“I was in the Seanad from 2002 until 2007 so I know how it all works. It is a very good environment for a more detailed discussion and analysis of legislation,” he said.

“There isn’t the same level of acrimony as you would find in the Dáil, people tend to work better together across party lines. I’ve come through the election campaign, dusted myself down and now I will be travelling to every county and engaging with councillors and putting myself forward for their consideration.”

Adrian Cummins, chief executive of the Restaurants Association of Ireland, said he hoped Mr Dooley would “continue his great work lobbying and fighting for the hospitality sector.

“Times are tough, and restaurants have been closing at a staggering rate of almost one per day this year,” he said. “We need action from the government, and we need it now. Local Irish businesses are crying out for help.”

A number of other candidates for the Seanad elections were announced on Monday, including an activist who has campaigned on behalf of deaf people.

Dr John Bosco Conama, a lifelong deaf rights activist, was nominated to the Seanad by the Irish Deaf Society and Chime, the national charity for deafness and hearing loss.

A deadline for nominations to the Seanad from outside civic society bodies to the five vocational panels that elect 43 of the Seanad’s 60 members was on Monday.

Fianna Fáil and Fine Gael will make their final decision on candidates this week with a large number of former TDs in the mix.

Twelve Fine Gael TDs lost their seats including Minister of State Seán Kyne, whom the Taoiseach nominated to the Seanad for its remaining few weeks to succeed Frank Feighan, who won a Dáil seat.

Fine Gael is focused on securing seats where it has no Dáil representation including Dublin North-West, where Noel Rock lost his seat, Carlow, where Pat Deering lost his seat but has an outside Seanad nomination, Waterford and Tipperary. Most candidates will only know next weekend if they are on the ticket.

Roscommon-based councillor Órla Leyden has been nominated following the retirement of her father Terry Leyden after 18 years in the Upper House.

The total electorate for the 43 vocational seats is 1,200, comprising outgoing Senators, TDs and city and county councillors.

Six further Senators are chosen by NUI and Trinity College graduates and 11 are selected by the incoming taoiseach.