River Barrow: ‘Visitors are just flabbergasted at how gorgeous it is’ 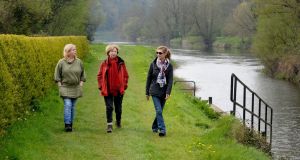 Save the Barrow line committee members Marie Kinsella, Olivia O’Leary and Anne Butler: An Bord Pleanála has rejected a Waterways Ireland plan for a hard surface along the towpath. Photograph: Alan Betson

Broadcaster Olivia O’Leary loves the Barrow, the longest of the Three Sister rivers that rises in the Slieve Blooms and marks the boundary between Kilkenny and Waterford on its right, and Carlow and Wexford on its left as it flows to the sea.

“A river is a living thing. It’s changing all the time, it’s got fantastic wildlife,” says O’Leary, who has been a leading member of the campaign against plans to create a 115km walk and cycleway.

Known as the Barrow Blueway, the proposal rejected by An Bord Pleanála this month, was to stretch from Lowtown in Co Kildare to St Mullins in Co Carlow. However, it prompted controversy and disagreement from the off.

The existing grassy surface of the towpath would have been ripped up and replaced with a hard surface to attract more walkers and cyclists, as has happened in Waterford where an old railway line has been successfully converted.

O’Leary, raised in Bagenalstown, and others in the south Carlow area formed the Save the Barrow Line group to oppose the plan, attracting hundreds of people to public meetings.

The broadcaster and author wants the river left alone, but promoted as the “Barrow Camino”: “The grassy surface allows you to have more people while still not disturbing the peace. It keeps it quiet and at a certain pace,” she said.

Indeed, the route has historic links to the famous Camino de Santiago pilgrim route, since Irish pilgrims bound for the Spanish challenge in centuries past often travelled along the Barrow on their way to Waterford Port.

Both campaign groups produced ecology, hydrology and economic reports, expressing fears that the loose, unbound surface proposed by Waterways Ireland would leach into the water during flooding and damage the local ecology.

Planners first in Carlow County Council and then An Bord Pleanála agreed. An Bord Pleanála stated it was not satisfied that the surface would not adversely impact upon the local ecology, specifically citing the Barrow’s SAC status.

In addition, the planning appeals body deemed that the Blueway would “likely endanger public safety” due to the narrowness of the path in areas, in its judgment delivered a fortnight ago.

Defeated, one of the Blueway’s strongest supporters, Martin O’Brien, owner of the busy Mullicháin Café in St Mullins, said: “We’d love to have seen compromise whether change in the surface, or restrictions where it was too narrow.

“But don’t just kill it forever. Look at Graiguenamanagh, look at Goresbridge. Shop after shop, pub after pub is closing. I know it’s the same all over Ireland but this was a fantastic opportunity to save these places.”

Some parts of the towpath are in poor condition, boggy and overgrown, he said, adding that some opponents reject change of all types: “The mentality is, ‘I have my pension, I have my house and you are not going to destroy that.’”

Liam O’Mahony agrees. He lived along the Barrow on a barge at Graiguenamanagh for much of the last 15 years. A supporter of the Blueway, the Cork city native decided last year to move, fed up with local opposition to the project.

“I realised the place was backward-looking and I couldn’t stick that kind of attitude,” he said, “I said I would move back once the Blueway got planning permission but seeing that it hasn’t I won’t be back again.”

Others take a more diplomatic view. Charlie Horan of Go With the Flow Adventures, who takes thousands of people canoeing on the river annually, believes it could be one of Ireland’s premier national amenities.

“I have people coming from the States, Canada, Australia, Europe, UK and they are just flabbergasted at how incredibly gorgeous it is, and they can’t believe there is nobody on it,” he told The Irish Times.

Promotion and proper signage would boost numbers further, even without the Blueway: “We are hung up about whether there should be a hard track or a soft track on it. Don’t worry about! Just promote it and maintain what we have. Cut the grass and make it amenable,” he says.

What happens next for the Barrow is still uncertain. Waterways Ireland, which is responsible for the island’s inland navigable waterways, has already spent several hundred thousand euro on the proposal.

If it had gone ahead, the work would have cost €11 million. Now, Waterways Ireland says it will consider An Bord Pleanála’s report and indicates that it will likely be some time before they make a decision on their next steps.