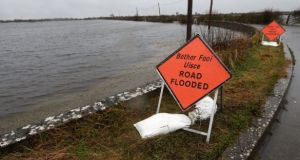 There will be heavy and, at times, intense rainfall with totals of 25mm to 40mm expected. File photograph: Laura Hutton/The Irish Times

Localised flooding is possible throughout the country, as yellow weather warnings are issued for several counties from Tuesday night.

There will be heavy and, at times, intense rainfall with totals of 25mm to 40mm expected, which may result in localised flooding, the forecaster said. The rain will clear western counties by early Wednesday morning.

It is forecasted to turn cooler and more settled for the rest of the week and weekend.

Wednesday will have a wet and blustery start across the midlands and east, with heavy rain for a time and a continued risk of spot flooding.

Brighter, sunnier conditions with scattered showers in the west will gradually extend to all areas through the day, with highest temperatures of 12 to 15 degrees.

Showers will continue into Wednesday night, most frequent in the west, where some will be heavy and possibly thundery with hail. Longer clearer intervals will occur over eastern parts of the country. Lowest temperatures will be between two and six degrees, with the east being the coldest, where some grass frost is possible.

There will be widespread showers for a time on Thursday, some of the showers will be heavy and possibly thundery with hail. Sunny spells will occur also.

The showers will become mainly confined to coastal areas on Thursday night with clear spells developing inland. There will be lows of two to five degrees with some grass frost developing.

Friday will be another cool day with a mix of bright spells and scattered showers, with the showers most frequent in the east of the country.

Current indications suggest that it will remain cool and unsettled for the weekend with showers or longer spells of rain, turning heavy at times. There is also the potential for strong winds on Sunday, particularly in the west and northwest.