Limit of six for indoor events and 15 outdoors but theatres, museums, cinemas can take 50 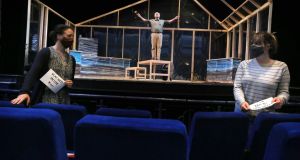 The Government has been forced to clarify the number of people allowed to attend cultural venues following conflicting statements and widespread confusion over the revised Covid-19 restrictions.

In a statement on Thursday morning, the Government confirmed no more than six people can attend most indoor cultural events while outdoor events are limited to 15 attendees.

However, it said businesses/services such as museums, cinemas, theatres and art galleries are “deemed to be controlled environments” and can continue to hold up to 50 people. “Individual groupings attending these venues must be limited to six people from no more than three households” and appropriate physical distancing and all other protective measures must be maintained.

Outdoor events are limited to 15 people as they are deemed “mass gatherings where there is a concentration of people at a specific location for a specific purpose over a set period of time” and allow the virus to spread.

Thursday morning’s statement came after calls for clarity following a series of conflicting statements from different Government departments about how the revised Covid-19 restrictions affect cultural and entertainment events.

The limit on outdoor events is likely to impact on a number of planned events, including DruidGregory, the Druid Theatre season of Lady Augusta Gregory plays due to be performed outdoors at Coole Park in early September, followed by a tour of Co Galway as part of a revised Galway 2020 European Capital of Culture. It may also affect planned outdoor performances of The Abbey Theatre’s The Great Hunger in the grounds of the Royal Hospital Kilmainham for autumn’s Dublin Theatre Festival.

The latest clarification of measures affecting the cultural sector directly contradicts Wednesday afternoon’s information from the Department of Arts that outdoor performances of up to 200 people were permitted.

“Clarifications” of the guidelines from the departments of Health, Arts and the Taoiseach issued since Tuesday directly contradicted each other which has led to some performances being cancelled and others waiting to know whether they can go ahead with rehearsals or plans for performance.

Early on Thursday morning National Campaign for the Arts (NCFA) chairwoman Angela Dorgan said “the confusion is worse than the actual lockdown”, as artists and organisers were still waiting to know if they can have a performance.

The chaos began on Tuesday evening with unclear messaging from the initial Government press conference amending the revised Covid-19 restrictions, which mentioned sports, religious services and weddings specifically, but not the cultural sector. This led to confusion in the arts sector through Tuesday evening and Wednesday morning about whether a new limit of six people gathering indoors, and the reduction in the maximum at outdoor events from 200 to 15, applied to arts events or not.

The grassroots NCFA organisation fielded anxious enquiries – more than 50 emails from arts organisations and 50 Twitter direct messages by the middle of Wednesday – after the unclear guidelines. Ms Dorgan said there was “panic” in the arts sector. “The arts and events sector are making enormous efforts to innovate and deliver safe live experiences, despite the most challenging of circumstances and for the most part at great financial loss.”

On Wednesday afternoon, the Department of Media, Tourism, Arts, Culture, Sport and the Gaeltacht clarified in writing that events in controlled environments, such as cinemas, galleries and theatres with physical distancing and appropriate protective measures, “can continue to operate under existing limits”.

Those guidelines were a maximum of 50 for indoor events and 200 outdoors.

But information later on Wednesday from the Department of Health added confusion, saying that “museums, cinemas and galleries” were deemed controlled environments with protective measures such as physical distancing and could “continue to operate”. It said other “indoor cultural events” were subject to the maximum six-person rule, with possible individual exemptions granted case-by-case by the Department of Culture.

The statement from the Department of Health did not mention theatres at all.

Amid the conflicting information and lack of clarity, artists and organisations planning theatre, music and other events were paralysed. On Thursday morning, the NCFA said: “We are overcoming huge obstacles to reignite live experiences & events. Every moment working costs us: financially, physically, mentally. If we have to stop for public good, we will, but we need to know the decision making is informed, considered and proportionate.”

Both the Arts Council, the State agency for the development of the arts, and the NCFA criticised the mixed messaging with the latter saying saying the “additional stress and worry through lack of clear communication was cruel and unnecessary”.

The NCFA said it recognised the pressure Government departments are under, but “the arts continue to be side-lined when announcements are being made, which further erodes confidence, goodwill and security”.

Government press conferences on Tuesday and Wednesday made no reference to “professionally staged arts experiences and live events. It is difficult to understand how the Government overlooked the inclusion of specific information to allay concerns within the sector that is most affected by restrictions on gatherings.”

A limited number of indoor and outdoor performances of music, theatre and dance, with extremely limited numbers and careful safety protocols, have marked the start of a return to live performance.

Dorgan estimated 200 indoor and outdoor arts events are planned over the coming days. “People are really trying to bring audiences back out albeit under Covid restrictions. They were hoping to get ready for a winter of doing things differently, and this could have meant a whole other pivot again if it was going to be 15 indoors and nobody outdoors,” she said.