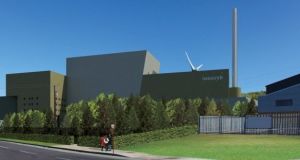 An artist’s impression of the proposed incinerator at Ringaskkiddy in Co Cork.

Campaigners against a proposed €160 million incinerator for Cork Harbour have raised almost €30,000 to fund a judicial review of An Bord Pleanala’s decision to the grant planning for the project.

Cork Harbour Alliance for a Safe Environment spokeswoman Mary Hurley said that they were very heartened by the response of the public to the decision by An Bord Pleanála last Wednesday to grant planning permission to Indaver Ireland to build an incinerator at Ringaskiddy.

Ms Hurley said An Bord Pleanála opted to ignore the recommendation of their own inspector against granting permission and this seemed to have galvanised even more opposition to the planned incinerator in communities around Cork Harbour.

“We’re very pleased with the response to our appeal - our Go Fund Me page to raise money for a possible judicial review has raised €29,059 from 469 different donors and it’s a very solid spread of donations – everything from €500 to €20 which reflects a very broad range of support,” she said. “The fact that so many people have come on board to support our campaign and a possible judicial review shows the depth of feeling on this issue.”

Ms Hurley said Chase are consulting with their legal advisors about whether it will be possible to seek a judicial review of the decision which would cost between €150,000 and €200,000

She said the site chosen by Indaver has since been rezoned by Cork County Council and would require a material contravention of the county development plan to allow it proceed.

That in turn would require members of Cork County Council to vote for a material contravention which doesn’t seem likely at the moment given the widespread political opposition from the vast majority of public representatives in the area to the incinerator proposal, she said.

“Added to that, we’ve seen where Cork County Council has begun developing Spike Island as a major international tourist attraction while the clean-up of the former Irish Steel plant at Haulbowline will lead to the creation of a public park and amenity area there.

The decision to grant planning permission for the facility was welcomed by Indaver Ireland managing director John Ahern last week who said the project was in line with regional, national and EU waste policy.

“We are pleased that An Bord Pleanála has decided to grant permission for our Ringaskiddy project, however, we are conscious that this decision simply marks another step in a long process,” said Mr Ahern who pointed out Ireland currently exports significant amounts of residual municipal waste

1 Luke ‘Ming’ Flanagan bares his bottom half to European Parliament
2 Gardaí investigate Dublin Black Lives Matter protest over Covid-19 rule breach
3 Miriam Lord: Not a bare ankle, hairy knee or a Ming the Trouserless to be seen at Covid committee
4 Trump turns to bible for photo op as DC burns around him
5 Coronavirus: Speed limits to be cut to 30km/h across Dublin City Council roads
Real news has value SUBSCRIBE