DUP would not back May if NI treated differently post-Brexit 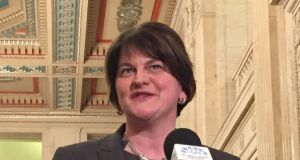 DUP leader Arlene Foster: “For us our only red line is that we are not treated any different from the rest of the United Kingdom, that there are no trade barriers put up between Northern Ireland and our biggest market, which, of course, is Great Britain.” Photograph: PA Wire

Ms Foster rejected the latest idea floated by the UK government to avoid a hard border on the island post-Brexit and break the impasse in negotiations between the EU and the UK.

Speaking to Sky News, the DUP leader, whose party keeps Ms May’s Conservative Party in power at Westminster, said she would withdraw her support if Northern Ireland was treated differently from the rest of the UK after the UK leaves the EU in March 2019.

Ms Foster said maintaining alignment between Northern Ireland and the rest of the UK was a “red line” that if crossed would result in Ms May losing the support of the 10 DUP MPs in the House of Commons.

“For us our only red line is that we are not treated any different from the rest of the United Kingdom, that there are no trade barriers put up between Northern Ireland and our biggest market, which, of course, is Great Britain.

“That’s what we will judge all of the propositions that are brought forward, we will judge it against that red line, and she’s very much aware of that, and I have confidence that she knows that she cannot bring forward anything that will breach that red line or we simply will not be able to support them.

On Friday, it was reported that the UK’s Brexit secretary David Davis was creating a plan that would give Northern Ireland joint UK and EU status so it could trade freely with both and set up a “special economic zone” of 10 miles (16km) along the Border to eliminate the need for checkpoints.

The idea has been dubbed Mr Davis’s “max fac 2” – an advanced version of his “maximum facilitation” or “max fac” solution relying on technological solutions to maintain an invisible border on the island.

Michel Barnier, the EU’s chief negotiator in the Brexit talks, has rejected this plan, and the option of a customs partnership proposed by London as neither operational or acceptable to Brussels.

Failure to find a solution to avoid a hard border jeopardises negotiations to secure a deal ahead of the UK’s formal departure from the EU next March, and raises the prospect of a disorderly Brexit.

Britain would experience shortages of medicine, fuel and food within a fortnight without a deal under a “Doomsday Brexit scenario” drawn up by senior civil services for Mr Davis, the Sunday Times reported.

Labour leader Brendan Howlin said the British people should be allowed to vote again on Brexit if there was a risk of such a “nightmare” scenario materialising, something he described “as a treasonous act”.

“If the no-deal scenario materialises, we owe to our friends in the UK to support a referendum which would allow the UK to reverse the previous referendum result,” he said.

Negotiations are entering a critical period as Dublin and Brussels have urged London to show substantial progress on Border proposals by the next European Council meeting of EU leaders at the end of the month.

Tánaiste Simon Coveney has said Mr Barnier’s EU taskforce must receive detailed proposals in writing from the British government within a fortnight if they are to be agreed at the June 28th-29th council.

On Friday, in response to Mr Davis’s reported “max fac 2” plan, Mr Coveney’s department called on the British to engage “in a more detailed way” on other solutions and a legal text on the “backstop” option that would effectively keep Northern Ireland under EU economic rules if there is no other plan for the Border.