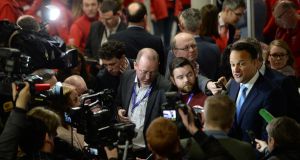 Taoiseach Leo Varadkar at the official opening of the BT Young Scientist & Technology Exhibition in the RDS on Wednesday. Photograph: Dara Mac Dónaill

The prospect of a united Ireland had been pushed back and reconciliation undermined by the Royal Irish Constabulary (RIC) commemoration controversy, Taoiseach Leo Varadkar has said.

Mr Varadkar accused “some elements of the Opposition” of false claims and misrepresentation – notably that the event would be “a celebration of the Black and Tans”.

He said Minister for Justice Charlie Flanagan had made the right decision on Tuesday to defer the event, a decision made with his imprimatur.

However, in a further twist on Wednesday, a Minister said the list of centenary commemorations for 2020 that came to Cabinet for approval before Christmas did not include the RIC event.

Chief whip Sean Kyne told Nuacht TG4 that a list was read out of proposed events, including occasions to mark the burning of Cork, the murder of Cork’s lord mayor Tomás MacCurtain, the sacking of Balbriggan and the execution of Kevin Barry.

“This [RIC] commemoration was not on the list that came before Government before Christmas so it wasn’t on the list of what we discussed,” Mr Kyne said.

The Department of Justice said it was the Minister rather than the Government who had taken the lead in organising it because the two organisations in question were police services.

Mr Varadkar accepted lessons could be learned from the controversy, and “perhaps things could have been handled differently”.

He said it had become an issue of unnecessary controversy, and he hoped the commemoration could be held at a later date after consultation with the Opposition and others.

Speaking at the BT Young Scientist & Technology Exhibition in Dublin, the Taoiseach said he “firmly believes in a united Ireland”, and that it could be achieved in his lifetime.

A united Ireland, however, was about a different state and “must be one that recognises our shared history”, and the fact that there were one million people on the island who identify as British and as being from a unionist background.

The controversy was a setback for unity and reconciliation, he added.

Unionist politicians have deplored the decision by Mr Flanagan to call off the planned commemoration for the RIC.

The DUP, Ulster Unionist Party and the Traditional Unionist voice said the decision and the reaction to the proposal raised questions about how unionists would be treated in a united Ireland.

“Those leading the vehement opposition to this event are the same people who tell those of us in Northern Ireland that British identity would be respected and accommodated within some mythical ‘new Ireland’,” said Jeffrey Donaldson.

“When agreement cannot be found to commemorate those who died 100 years ago it is a clear demonstration of how far we still have to travel in terms of respect and reconciliation, particularly in relation to the British identity in Northern Ireland by republicans.”

Mr Donaldson said that those who served in the RIC and the Dublin Metropolitan Police “were Irish men and women from all religious backgrounds who lived and worked in an Ireland that was politically united”.

“Many of them suffered or were murdered for no reason other than the fact they wore a crown on their uniform, and it is difficult to escape the conclusion that opposition to this commemoration is based again on that.”

Ulster Unionist Party leader Steve Aiken said the decision was “disappointing, but not surprising given the tone of the debate and the language used by some of the leaders and elected representatives of political parties in the Republic of Ireland”.

“It exposed a direct and underlying contradiction to their previous public statements about reconciliation,” he said.

“The comments coming from Fianna Fáil and Sinn Féin representatives were deeply regrettable, and will further affirm the view among many unionists in Northern Ireland that there are many within the Republic of Ireland who continue to hold a deep animosity against anyone or any organisation linked to ‘the Brits’.”

Mr Aiken said that describing members of the RIC as “colonialists” and “oppressors” when the “vast majority of these men came from the island of Ireland, and served their communities with dedication, is an insult to their memory and their descendants”.

“These types of comments do nothing to build reconciliation, and demonstrate that some elements of society with the Republic of Ireland remain openly hostile to the British identity or those perceived to be associated with it.

“This hostility will not be lost on unionists who are the subject of repeated entreaties to consider embracing Irish unity and who are constantly assured that all would be well. Actions really do speak louder than words,” said Mr Aiken.

TUV leader Jim Allister said the “climbdown” by the Government was a “telling signal to unionists as to how they and their history would be treated in an all-Ireland”.

“If a predominantly Roman Catholic state police force from the South is so vilified by republican agitators, in a supposedly enlightened and modern state, that its government toadies to such bigotry, we can all imagine how unionist culture and traditions would fare in such a republican utopia.”

Minister for Business Heather Humphreys, who is a TD in the Border region for Cavan-Monaghan, said she agreed with the postponement of the event but she stressed it should go ahead at a future date.

“There was a lot of misinformation about this particular commemoration. It was certainly never about commemorating anything to do with the Black and Tans. It was about remembering the Irish men that lost their lives while working for the RIC, and it’s important that we remember all Irish lives that were lost,” she told reporters at an IDA Ireland event in Dublin.

“I do look forward to it taking place. A number of people have contacted me because their family members have served in the RIC and they did make sacrifices, and I do believe that they deserve to be remembered.”

Ms Humphreys said she did not mind when the commemoration took place “as long as it takes place”.