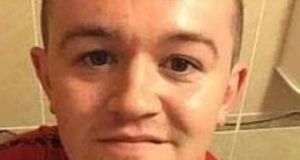 Video footage showed Steven O’Brien punched Danny McGee, pictured above, though Mr McGee was not even looking in his direction. O’Brien (26) was sentenced to six months in jail for Mr McGee’s one-punch killing in a New York court on Wednesday.

A Dublin man was jailed for six months in New York over the one-punch death of another Irishman, with the victim’s mother calling for a change in the law to ensure that similar crimes result in harsher sentences.

Steven O’Brien (26) sobbed throughout Wednesday’s hearing at the Queens County Criminal Court in New York before he was taken away to begin a sentence that the victim’s mother decried as an “inadequate response by society to a death” caused by a single punch.

O’Brien was charged with third-degree assault - a class A misdemeanour that carries up to a year in prison, according to the New York penal code - and pleaded guilty at his trial in November 2019. He stood accused of punching 21-year-old Danny McGee, of Drumlish, Co. Longford, in the head during a disagreement outside the Gaslight Bar in Queens a year earlier.

Mr McGee was found unconscious outside the bar in the early hours of November 22nd, 2018, and died in hospital.

O’Brien reportedly fled the scene but was arrested the next day. In several court appearances over the course of the past year, O’Brien pleaded not guilty in the face of a possible one-year sentence. His negotiated guilty plea, issued 364 days after the crime, saw him jailed for half of that.

“The impact of Danny’s death on me is immeasurable,” she wrote. “Thoughts of him consume every waking moment.”

Mrs McGee said her “honest, determined, compassionate” son was a “gentleman” who loved and excelled in playing Gaelic football. He had been raised to be a “good and decent person, to have respect for others and to not raise a hand in anger to anyone.”

That he died in such a violent manner left her in “disbelief” and struggling to keep it together some days.

“I don’t have the words to explain what it is like to go to a graveyard to ‘visit’ your child,” she wrote.

Her statement excoriated O’Brien not only for his actions that fateful night, in which she said video footage showed him punch her son when he was not even looking in O’Brien’s direction, but for his repeated pleas that he was not guilty.

“You chose to prolong our family’s agony,” she said, adding that the misdemeanour charge and sentence were inadequate for such a killing.

“It breaks my heart to think that the state of New York thinks so little of Danny’s life and the lives of all other one-punch victims as to treat these homicides as nothing more than a minor assault,” Mrs McGee said.

This was underscored by the assistant district attorney, Mr Ramnarain, who told the judge that it was “unconscionable” for one-punch death cases to continue to be treated as misdemeanour assaults.

Presiding Judge Mary Bejarano told O’Brien he needed to use his time behind bars to consider how his anger has affected not only his victim’s life and family, but his own. When she asked him would he address the McGee family, he looked down at the ground and shook his head, leaving his lawyer, Matthew Gartenberg, to offer condolences instead.

As he was led away in handcuffs, O’Brien’s family and friends cried. Some shook their heads. Mr Gartenberg told The Irish Times his client was remorseful, and had “accepted responsibility” for his actions.

“He’s really looking forward to putting this behind him,” he said.

Outside the courtroom, Mrs McGee was comforted by her family. She told The Irish Times her son needed justice, and that she wanted O’Brien “to serve some time and think about his actions”.

O’Brien refused to answer questions about the case before the hearing. His lawyer, Mr Gartenberg, would not comment on his client’s immigration status, and whether or not this would be affected by the outcome of the trial and sentence.