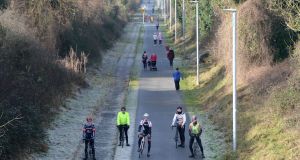 Route options for a 130km Athlone to Galway greenway have been published as part of an online public consultation process.

The project will become part of the Dublin to Galway greenway which, in turn, is part of EuroVelo 2, a “European Capitals” 5,000km route from Moscow via Minsk, Warsaw, Berlin, London to Galway.

Five possible route corridors have been outlined for the Athlone to Galway section, in a study area that runs from Tuam in the north to Portumna in the south.

Plans for the route from Athlone Castle to Galway city had reached the “preferred route” stage before they were put on hold in 2015 following vociferous opposition from landowners in east Galway who said adequate consultation had not taken place.

The design team led by project manager Cian McGuinness has opened a virtual public consultation where people can see the route corridors, maps and leave virtual comment cards. Mr McGuinness said the cycleway would be “a really great asset for east Galway, Roscommon and Westmeath” and would contribute to developing domestic and international tourism “as well as being a fantastic resource for local people”.

In a video overview of the cycleway, Mr McGuinness said it was driven by “five Ss” from the Government’s greenway strategy. These are that it should be scenic; involve things to see and do; be substantially segregated from motor traffic; be a strategic link; and be developed and operated in a sustainable manner.

A new pedestrian and cycling bridge over the Shannon in the centre of Athlone is to go to construction this year. Director of services with Westmeath County Council Barry Kehoe said the bridge would be a vital part of the future development and architecture of Athlone town.

Jim Maguire, chairman of Shannonside Cycling Club, said the Mullingar to Athlone greenway – The Old Rail Trail – offered “a tranquil, yet purposeful path through midland towns and regions”. The extension to Galway would be good for cycling, business and tourism in the region, he said.

He said cycling clubs in all the local towns regularly ply the Old Rail Trail and it had encouraged many who were wary of traffic on the roads to take to the bike.

“We are looking forward to the Athlone Castle to Galway city stretch” he said.

The public consultation site is at galwaytoathlonecycleway.com