Report containing submissions from abuse survivors will not be made public 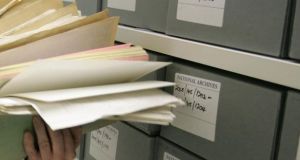 Some two million documents consisting of the testimony of institutional survivors have been deposited with the National Archive. Photograph: Alan Betson

A report containing submissions from survivors of institutional child abuse will not be made public because it contains personal information.

An Oireachtas committee is expected to agree not to publish the personal testimonies of those who gave evidence on the future of records relating to residential institutions.

It will report its findings on Wednesday and give a summary of the submissions that it has received.

However, it will not make public the report it has prepared for Mr McHugh stating that many abuse survivors have given “private personal information”.

Some two million documents consisting of the testimony of 15,000 institutional survivors and those who worked in the institutions have been deposited with the National Archive.

The draft Retention of Records Bill 2019, which was introduced into the Dáil in the spring recommends not making these testimonies public for 75 years after the Bill becomes law.

This would mean that the earliest possible date for the archives to be opened will be 2094.

The Joint Committee on Education and Skills was due to submit its report to the Minister for Education Joe McHugh.

Mr McHugh has stated that the records should eventually be made public so that future generations “never forget the harm that was done to children and the need to ensure that the protection of children is always to the forefront of our minds”.

The committee, however, noted that many survivors retained a “cynical view” of the proposed 75 year rule.

They concluded that the Government is trying to conceal something and that there is a danger the Bill is “sweeping this issue under the carpet again”.

The Oireachtas committee’s summary of submissions states: “Transparency in public office is the best way to gain trust and this is especially true if redress, responsibility and recovery are the motives behind the Government in relation to institutional abuse in Ireland.

“Some survivors view this lack of transparency as a further structure in the secrecy and shame that resulted in the trauma of generations of children in the first place.

“If there is a genuine commitment to a better future, the submissions stated that it is incumbent on the Government to demonstrate to survivors, and the wider national and international community, that is unafraid of tackling its past and supporting its present.”

The committee stated that it supports proposals to building a national monument to the survivors of Ireland’s institutions and that survivor history be taught in secondary schools.

This is despite several submissions which suggested that the 75 year rule means that the history cannot be properly told.

In an interview with The Irish Times last May, Mr Justice Ryan highlighted the dilemma facing legislators, saying people gave evidence to the confidential committee on the basis that it was “utterly confidential, full stop, end of story”.

“As to the investigation committee, every hearing about abuse or what happened to an individual had a double lock. The section says that you can’t identify the person nor can you give information that would enable the person to be identified.”

He asked: “How do you deem that not to be the basis on which people gave evidence? They’ve said maybe 75 years, the truth is there isn’t a way out.”