Where a house of God succumbed to Apollo: Church ruins revealed in Dublin dig 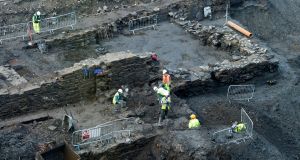 Archaeological works ongoing on Monday at the site where Apollo House previously stood, on the junction of Tara Street and Poolbeg Street in Dublin city centre. Photograph: Chris Maddaloni

The ruins of a large Catholic church which was built in the centre of Dublin more than 300 years ago have been discovered on the Apollo House site.

The office block on Tara Street, which was demolished last year, was the scene of a high-profile sit-in by homelessness campaigners over Christmas 2016.

As part of the planning conditions for the site’s redevelopment, a licence for archaeological excavations was granted by the Department of Culture, Heritage and the Gaeltacht.

Marlet, the developer, was mandated to hire archaeologists to carry out excavations and document their findings.

An extensive archaeological dig at the site has now revealed shadows of the site’s past. The first ruins to be uncovered were the thick stone walls of a national school which was still standing in the shadow of the office block as late as the mid-1980s.

But what lay underneath the old school house proved to be of more interest to archaeologists – the ruins of a considerably older structure which once served as a covert church for Catholics living in the south inner city.

The ruins, dating back to the turn of the 18th century, were unearthed in recent weeks by archaeologists led by Franc Myles of the historical buildings consultancy firm Archaeology and Built Heritage.

A church was first built on the site in 1709 in Penal times when the practice of Catholicism was banned. In spite of the religious restrictions, the chapel flourished and attracted thousands of worshippers.

“There was probably a building used as a chapel from the foundation of St Andrew’s parish in 1709 and it is depicted on John Rocque’s map [of Dublin] of 1756,” the archaeological report prepared for the developers says.

By 1811, the parish had grown and “it was decided that the chapel would have to be reconstructed”, the report says.

The inscribed foundation stone for the new chapel was laid on April 23rd, 1814, by then parish priest Dr Daniel Murray, who went on to serve as the Archbishop of Dublin from 1823 to 1852.

Work on a new structure duly started, and by 1831 considerable progress had been made. However, progress stalled when there was a split in the ranks of the faithful.

A newly appointed priest of St Andrew’s Parish found “a more desirable site for a new church was available on wasteland at a more central location in the parish on Westland Row”.

Work at the Tara Street church, which features prominently on the earliest ordnance survey maps of Dublin, was halted. The building was subsequently deconsecrated.

“We have to dig here very carefully because the church is a recorded monument,” Mr Myles told The Irish Times.

He noted that although it was a large structure and served many thousands of the Catholic faithful for more than a century, there was no graveyard attached to the church, which means the chances of skeletons being uncovered are remote.

The dig is likely to run up to Christmas.

Such excavations are either preserved in situ or preserved in record. Once the Tara Street ruins have been fully explored and the details recorded, they are likely to make way for the new office complex.

Mr Myles said that when his team started digging on the site, they were expecting to find an original quay wall and timber structures dating back to the 1670s.

But nothing of that nature was uncovered, leading Mr Myles to suggest that when Apollo House was being constructed in the late 1960s, most of the structures of archaeological importance “were basically demolished”.

He said evidence of the quays are “probably still under Mulligan’s Pub” on Poolbeg Street.