Noel Grealish row could be the tip of the iceberg 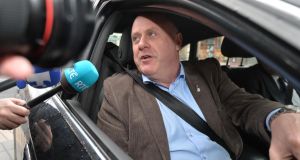 Chatting among themselves over coffee or in the Dáil bar, some TDs and Senators have been trying to figure out what exactly motivated Noel Grealish to make controversial comments about immigrants and asylum seekers.

Recent weeks have seen Grealish tell a protest meeting against now abandoned plans for a direct provision centre in Oughterard that “there are people that are coming over here from Africa. to sponge off the system here in Ireland”.

In the Dáil, he also asked Taoiseach Leo Varadkar for reassurance the “astronomical amount” of €3.5 billion sent home by Nigerian migrants here over eight years had been legitimate and not the proceeds of crime or fraud. The World Bank figures used by Grealish far surpassed data held by the Central Statistics Office, which put the flow to Nigeria at €17 million annually.

Grealish, who comes from a historically Fianna Fáil family and was first elected to the Dáil in 2002 as a Progressive Democrat (PD), is a member of the rural Independent group of TDs, alongside Mattie McGrath, Michael Harty, Michael Collins and Michael and Danny Healy-Rae.

He is on friendly terms with Tipperary TD Michael Lowry, is close to Roscommon’s Denis Naughten and regularly sits in the Dáil bar with Independent Alliance Ministers Shane Ross and Finian McGrath. Kevin “Boxer” Moran is also an acquaintance, and Michael McDowell, the former PD leader who is now an Independent Senator, keeps in touch.

Deputies from across the Dáil have privately reported that anti-immigrant sentiment has been rising among voters and feared that it could be exploited for political gain. Those who know Grealish were surprised that he was the first to make public comments which spoke to that constituency.

Grealish has since maintained a media silence, but has been around Leinster House, chatting to his colleagues.

On the level of pure constituency politics, there is an understanding among some TDs of his Oughterard comments, although many object to his use of the word “spongers”.

Grealish is said to have told colleagues that his concerns in relation to Oughterard were that 150 single men – whom he believed would be primarily economic migrants rather than asylum seekers – would be staying in dormitory accommodation, and he feared the effect this could have on the host town. He “seems to have a bee in his bonnet on economic migrants”, said one source.

The Dáil question on remittances was viewed on an entirely different level by most of his colleagues, although a few – such as Mattie McGrath – have defended him in public.

A widely held view is that Grealish, encouraged by the response to his Oughterard comments, pursued the theme further. It is also commonly believed – although nobody has proof – that he was pointed in the direction of the figures he quoted in the Dáil.

“I don’t think Noel would be sitting down reading reports from the World Bank,” a source said. Some of his friends objected to the remarks to his face afterwards, telling him he was wrong. He has also been told that he has damaged his prospects of becoming a Minister in a future coalition.

Not all TDs object to what Grealish has done.

“The Ceann Comhairle didn’t stop him,” said one who supports his stance. “It was Sheriff Coppinger [Ruth Coppinger, the Socialist TD who called Grealish a racist] who shouted him down. It is mob rule.

“He is overwhelmed with people [offering support]. People are sick and tired of the whole PC s**t that is going on. The media is totally biased, totally PC. There is no open and honest debate.”

While Grealish has given the impression to some that he may not raise such issues again, those who have spoken directly to him say “he is more determined than he was two weeks ago.

“It doesn’t bother him in the slightest that the media in Dublin are attacking him. He is not backing down. His view is that it is going down well in his constituency.”

Grealish did not return requests for comment from The Irish Times.