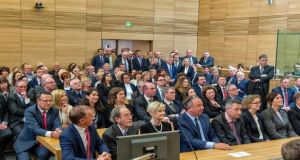 A new €34.8 million criminal court complex in Cork will meet the city’s needs for decades to come, according to Minister for Justice Charlie Flanagan.

Mr Flanagan said the opening of the refurbished and extended Cork Courthouse on Anglesea Street was a significant day for all involved in the administration of justice in the city, which is second only to Dublin in terms of the volume of criminal cases handled.

“In addition, the High Court sits in Cork for up to 16 weeks per year dealing with personal injury cases and non-jury matters. The Central Criminal Court also sits in Cork, including for the coming months of June and July,” he said.

Mr Flanagan said the new courthouse, incorporating six new courtrooms compared to the previous three at Anglesea Street, will allow additional sittings across the different jurisdictions as well as allowing the Court of Criminal Appeal to sit in Cork as required.

Chief Justice of the Supreme Court Mr Justice Frank Clarke said the new improved facilities, at what was originally the Model School built in 1865, will help create an atmosphere beneficial to all who have business in the courts of Cork.

The judge said the new courthouse reflects the best of current thinking on design with six courtrooms and associated facilities including waiting areas, consultation rooms, victim support facilities, custody facilities, rooms for legal practitioners, the Garda and the Prison Service.

“With this project now completed and with the fine courthouse on Washington Street continuing in operation for civil cases, Cork city now has what are probably the best court facilities in the country,” he said.

The judge noted that the new complex now contains some 8,500sq m of accommodation, a five-fold increase on the 1,500sq m available in the old Anglesea Street Courthouse, which began operating as a courthouse in 1995.

Lord Mayor of Cork Cllr Tony Fitzgerald hailed the opening as an important day for Cork. But he stressed it was important that money also be invested in schemes and projects to prevent young people becoming involved in criminal activity and ending up before the courts.

The new complex is one of seven new courthouses commissioned by the Department of Justice and the Irish Courts Service. They have been built by BAM Ireland in a €140 million public-private partnership which will require the company to maintain and service the buildings for 25 years.