Anti-abortion GPs want protection if they refuse to refer patients 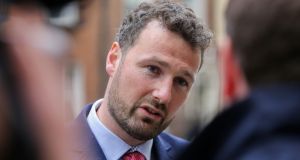 Doctors who opposed removing the ban on abortion will ask Minister for Health Simon Harris to protect them from prosecution if they refuse to refer women to GPs willing to perform terminations.

Medical Alliance for the Eighth, a group representing GPs, nurses and midwives, said it was “naturally very disappointed” with the comprehensive victory for the Yes side in Friday’s referendum to repeal the Eighth Amendment.

The group has called on Mr Harris to extend protections for conscientious objectors to doctors who refuse referrals, which would, under the Government’s proposed abortion bill, be a breach of the law.

The alliance wants the Minister “to fully respect and protect the right to conscientious objection for all healthcare professionals and to ensure that nobody can be prosecuted for refusing to facilitate abortion.”

The Government’s draft legislation exempts any medical practitioner, nurse or midwife from carrying out an abortion if they have a conscientious objection.

However, even they object, they must under Head 15 of the General Scheme of A Bill to Regulate for the Termination of Pregnancy “make arrangements for the transfer of care of the pregnant woman concerned as may be necessary to enable the woman to avail of the termination of pregnancy concerned.”

Co Kerry GP Dr Andrew O’Regan, who spoke to The Irish Times on behalf of the alliance, said the group would be asking the Government to extend protections for conscientious objectors to GPs who refuse to refer women on to other doctors when it is finalising the legislation.

Dr O’Regan said the group intended to tell the Minister during the preparation of the legislation that “there are probably going to be enough doctors out there who will do this; could you not make an allowance for those who don’t want to be involved in it and extend that to not making us refer on either?”

If medical practitioners, nurses and midwives were opposed abortion, then they would be unwilling to be involved in the process and refer women on, said the Killarney-based doctor.

“If someone is saying that it goes against my entire conscience and everything I am about, and goes against everything that I understand as good healthcare, then I am not going to refer it either,” he said.

“The big buzz word during the campaign was choice. What about the choice of the doctors who say this isn’t what we signed up for?”

Doctors for Life, another group representing medics which campaigned for a No vote in the referendum, said it would be “a clear voice for those healthcare professionals who do not wish to use their skills against the weakest members of society, of any age.”

“We will not perform any action to deliberately end the life of any of our patients,” said the group in a message posted online after the referendum result.