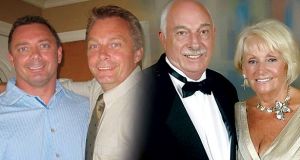 (From left) Steve Alexander, Doug Alexander jnr and their parents Doug Alexander Snr and Lily Alexander died after their rental car collided with a lorry in Wexford. Photograph: via Facebook

The Irish and American families of an elderly couple and their two sons who perished in a road traffic collision in Co Wexford this week have paid a heartfelt tribute to them in advance of a funeral Mass today (Monday).

Irish-American family Doug and Lily Alexander (both 75), and their sons Doug jnr (52) and Steven (49), were all killed when their hired BMW was in collision with an articulated lorry travelling in the same direction at Begerin Hill between New Ross and Ballinaboola on the N25 on December 4th.

The family had flown into Shannon earlier that day to attend the funeral of Ms Alexander’s sister, Winnie Keevey, who had died on December 2nd, and they were on their way to St Mary’s Church in Cushinstown near New Ross for a rosary service on the night in question when the incident happened.

Both Ms Alexander and Ms Keevey were originally members of the Ryan family from Patrickswell in Co Limerick.

The Alexander, Keevey and Ryan families have issued a statement through the Bishop of Ferns, Dr Denis Brennan, in which they paid tribute to their loved ones.

“It is with great sorrow that our family and friends unite – across the Atlantic Ocean – to mourn the passing of Lily, Doug, Steven and Doug jnr Alexander. They were generous, loving and fun,” said the three families in the statement, issued in advance of a funeral Mass in Cushinstown on Monday.

“As well as their love for the family in America, they opened their hearts and homes to all who travelled from here in Ireland to visit with them. They greatly enjoyed their regular trips to Ireland, with their final trip here to say farewell to Lily’s sister, Winnie. May she too Rest In Peace.

“They will be greatly missed but we are left with wonderful memories of great times spent together both here and in Oak Lawn, USA. Our whole family appreciates all of the kind words and support which we have received, and we ask for privacy as we grieve at this sad time.

“Our family deeply appreciates the work of all first responders and the ongoing assistance of civil and community services. Our deep gratitude goes to the local parish and Church community. We thank you all.”

Doug Alexander jnr had one child, while Steven had two daughters. A day after the crash, his partner Susan Schulze had paid tribute to him in a Facebook post: “I can never express the happiness Steve gave me. He showed me true love. I am so blessed to be a part of his life.”

Following the funeral Mass, taking place at noon on Monday at St Mary’s in Cushinstown, the bodies of the four members of the Alexander family will be repatriated to the United States for further ceremonies in Chicago.

All four died at the scene of the incident. The driver of the truck, a man in his 40s and his assistant, a man in his 30s, were physically uninjured but were badly shaken and treated for shock.

The exact cause of the crash is still being investigated. One line of inquiry which gardaí are examining is that the Alexanders were travelling in convoy behind a car being driven by a local person who was also going to St Mary’s Church.

It’s believed the first car may have missed the turn-off for St Mary’s and successfully executed a U-turn to return to the turn-off, and that the Alexanders were also executing a U-turn when they were hit from behind with the driver’s side of the BMW taking the brunt of the impact.