‘It’s not a rail extension they should be building, it’s a security wall’

An Taoiseach Leo Varadkar has officially opened the new Luas Cross City line, which will connect the existing green and red lines. 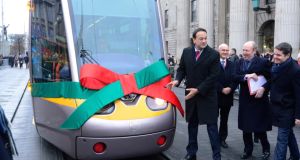 Straight down the line: the launch of the Luas Green line extension on O’Connell Street with Taoiseach Leo Varadkar, Minister for Transport Shane Ross and Minister for Finance Paschal Donohoe. Photograph: Cyril Byrne

The old dear is dressed in black. The colour of mourning. And even the two kilos of seal blubber and orangutan sperm she has injected into her cheeks and forehead every fortnight by one of the country’s leading plastic surgeons can’t hide the sadness in her face.

She looks at me with her head tilted to one side and her eyelashes flapping like mad. The full Diana. She goes, “Thank you for coming, Ross.”

I’m there, “Don’t flatter yourself. I heard you talking to Sean O’Rourke the other day and I came to rip the piss.”

Today is the first day of the Luas Cross City Service, linking the Red and Green lines. And it’s a sort of last stand for Luas Women, the old dear’s pressure group who’ve fought for five years to stop it from happening.

There’s about 250 of the most expensively-dressed protesters you’ve ever seen in your life gathered at the bottom of Dawson Street, where the first cross-city Luas is due to pass in, what, about two minutes from now?

They’re sitting on the track, linking orms and singing Nearer, My God, To Thee, except they’ve changed the lyrics and instead they’re going:

Never the twain shall meet,

I recognise most of them. There’s all of her mates from the golf club and The Gables - the Stoli Dollies, as I call them. And there’s quite a few veterans from her previous campaigns, especially “Move Funderland to the Northside” and “Build an Enormous Fan to Blow the Flue Gas from the Poolbeg Incinerator Towards the Likes of Kilbarrack and Raheny”.

“What they’re proposing to do,” she goes, “is dangerous in the extreme. Linking Ranelagh to Tallaght? Milltown to Smithfield? Leopardstown to Fettercairn? It’s messing around with the unknown, Ross.”

I’m there, “What do you care? You drive everywhere. Or you get taxis when you’re too drunk to find your cor keys.”

“In this world, Dorling, there are People Like Us and there are People Like Them. As your father says, this city has been planned in such a way as to ensure that we lead parallel and mutually exclusive lives. What they’re about to do will have the effect of bringing us closer together. And no one can predict what that will mean – other than that our homes are sure to be burgled.”

She really is a despicable human being.

I’m there, “Look, you and your mates fought tooth and claw – or, more specifically, veneer and manicured nail – to stop it from happening. You have to accept that you failed.”

She goes, “We haven’t failed, Ross. Not until the very first Luas passes down this street. And we are will still determined that it will not happen.”

There’s some lovely voices in the crowd. There’s obviously a fair few Protestants here and one thing you’d have to say about Protestants is that they know how to hold a note. It actually brings me back to my rugby days. Whenever you played the likes of Columba’s or Andrew’s or even Wesley in the early rounds of Leinster Schools Senior Cup, you’d nearly be tempted to stop scoring try after try against them and instead just enjoy the close hormony singing of their supporters.

“Hang on,” I suddenly go, “are you saying that when the first Luas comes around that corner, then down this street, all these people are going to stay sitting here?”

The old dear’s there, “Of course they are! It’s like I told Sean O’Rourke, it’s not a rail extension they should be building, it’s a security wall! Twelve feet high and topped with broken glass!”

“But you’ll all be killed.”

“We won’t be killed, Ross. The tram will be forced to stop.”

“Do you know how long it takes for those things to brake? Have you never heard the warnings on the radio?”

“This is a test of our strength of will and purpose! ‘Those who resolve to conquer or die, are rarely conquered!’ Who said that? It was someone.”

I’m looking around at all these people putting their lives quite literally on the line? And that’s when I see the Luas hurtling down Dawson Street towards them.

The old dear walks among them, shouting, “Strength, everyone! Courage! Unity!”

The thing is, like, 30 feet in front of them. The driver storts furiously ringing the bell but everyone stays sitting.

The driver is basically screaming at them to get out of the way.

I’m thinking, “Jesus, if this lot are killed, Donnybrook Fair may as well just drop the shutters.”

It’s suddenly, like, 20 feet in front of them and it’s obvious that it’s not going to stop.

“That’s it!” the old dear shouts. “Let’s show them what People Like Us are made of!”

And then, at the very last second, they all roll clear.

Then, still lying on the ground, they turn and watch the Luas disappear on to Nassau Street, towards Westmoreland Street and into the great unknown.