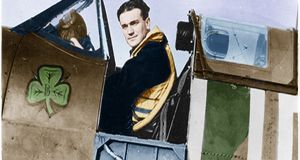 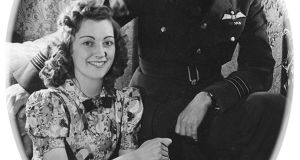 The grandson of an Easter Rising rebel who is also the son of a second World War RAF pilot will be attending this weekend’s commemorations.

Brendan Finucane QC, a judge at the Old Bailey in London, said he is delighted and honoured to have been asked by the Taoiseach Enda Kenny to attend as a relative of one of the veterans of 1916 and will do so in the company of his son Cian.

His grandfather Andy Finucane was in the Four Courts garrison as a 2nd Lieutenant under the command of Ned Daly, but his father Raymond joined Bomber Command and then Fighter Command during the second World War.

His best known relative is his uncle who he is named after. Wing Commander Brendan ‘Paddy’ Finucance was one of the most famous British fighter pilots of the second World War. His short life – he died aged 21 on a sortee to France in July 1942 – is soon to be released as a documentary entitled Spitfire Paddy: The Ace with the Shamrock.

Finucane’s record of 32 downed enemy planes is second in the list of RAF fighter aces after Johnnie Johnson.

Mr Finucane said his family story was a “bringing together of so many strands of Irish and English history given the transition from my grandfather to my father and uncle. I’m delighted this is happening at a time of mutual understanding when the Queen’s visit to Ireland was welcomed by a very large percentage of the population of Ireland.”

Andrew Finucane moved to Richmond, south-west London in 1936 for economic reasons. He did not return to Ireland for 40 years as all his relatives had passed away or emigrated.

When his eldest son Brendan expressed a desire to join the RAF in 1938, Andy Finucane refused to sign his application form. “He was not happy about it initially,” Mr Finucane says. “He had a very strong commitment to the cause of an Irish republic and that he had fought against the British.”

However, Andy Finucane became fiercely protective of his son’s reputation and legacy as his fame grew. He and his wife Florence pressurised the NHS to build the hospital wing in honour of their son. The funds had been raised by public subscription in his honour.

Meanwhile, the great-grandson of General Sir John Maxwell, who ordered the execution of the leaders of the Easter Rising said his actions were a negative that led to a positive.

Peter Carver, who lives in the United States, said Maxwell was doing his duty as a soldier. “Obviously, his actions had a great impact on subsequent events and the eventual freedom that Ireland got,” he told Morning Ireland.

“What he did had an obvious negative impact which created a great public rising. He viewed what happened as acts of rebellion and in terms of war that required harsh action.”