Employment in Ireland’s tourism industry has risen by 60,000 since 2011 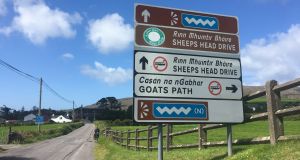 The Wild Atlantic Way near Kilcrohane on the Sheeps Head Penninsula in west Cork. Fáilte Ireland is looking at a similar initiative for the Shannon corridor. Photograph: Bryan O’Brien

Advance tourism bookings for 2018 indicate another record year for tourism, with foreign earnings set to hit €6 billion, the annual conference of the Irish Hotels Federation has heard.

Employment in Ireland’s largest indigenous industry has risen by 60,000 since 2011 with potential for a further 40,000 jobs by 2021, according to the organisation. However, it said, this growth was predicated on a soft Brexit and stability in the British currency.

According to a tourism barometer launched at the start of the conference in Co Cavan, 56 per cent of hotel and guesthouse owners reported a decline in visitors from Britain.

Some 53 per cent reported an increase in numbers from the US, and 32 per cent said they were getting increased bookings from Germany.

Advance bookings for corporate meetings and events – a significant source of business for almost half of all hoteliers surveyed – are also increasing, according to the survey.

Outgoing hotels federation president Joe Dolan said most hoteliers were planning to invest in their business this year. However, he said the industry needed to reinvest in tourism with an eye to value for money. There were parts of the country like the Shannon corridor which had much to offer and with the right support could expand the tourism offering and greatly benefit the rural economy.

Industry expansion with new and enhanced visitor attractions could provide a significant boost, he added.

Fáilte Ireland has employed consultants on such a plan for the region aimed at emulating the success of Ireland’s Ancient East and the Wild Atlantic Way. It is expected to be launched early in March.

While the hotels federation data indicated 67 per cent of hotels were reporting increased domestic bookings for 2018, Aaron Mansworth of Cork-based Trigon Hotels said the industry was competing with a “stay-at-home” campaign in Britain.

He said UK authorities had recently committed €50 million towards promoting holidays in the Lake District, which underscored the need for reinvigorated promotions in Ireland.

Hoteliers also warned of a pressing hazard: rising insurance costs which they said are set to reach €60 million this year. More than 80 per cent of hotels surveyed said this rising cost was having a significant negative impact on business.

The federation called for the swift implementation of the Government’s Cost of Insurance Working Group, including examining the feasibility of a cap on damages that may be awarded in personal injury cases.

Tourism was worth €5.78 billion in foreign earnings to the economy in 2017 and €8.75 billion when domestic figures are included. The industry now employs 230,000 people in the Republic.