Rare whale refloated after being washed ashore in Waterford 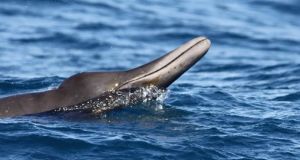 Whale and dolphin conservationists are hoping that a rare whale which was washed ashore in Co Waterford at the weekend will survive, as they paid tribute to local efforts to refloat the animal and return it to the open sea.

According to Strandings Officer with the Irish Whale and Dolphin Group, Mick O’Connell, it’s impossible to know whether the rare Sowerby’s Beaked Whale, which washed ashore at Baile na nGall near Helvick Head in west Co Waterford, will survive or not.

“We haven’t any idea whether it’s survived –we know it was refloated once by the local RNLI lifeboat crew at Helvic Head and it came back in again, so the second time, they brought it further out – hopefully it will survive but we just don’t know.

“You have to ask why it came ashore in the first place as Sowerbys usually live in much deeper water 300kms off the west coast – that makes me think it’s unlikely it will survive – it may be sick, but it’s got as good a chance to survive as it could because everything was done locally to get it back out to sea.”

Picture taken from the shore, Baile na nGall (western shore of Dungarvan Bay). Boat is staying off; some crew are already on the shore. Took two attempts, but at the second, when towed to deep water, the whale seems to have been happy to swim off (image copyright Catherine Foley) pic.twitter.com/xL28socc8E

Seven members of the RNLI Helvick Head crew, some of whom entered the water, managed to get the whale back out to the mouth of Dungarvan Bay with the aid of a tarpaulin at the second attempt; the animal swam off, much to the relief of those involved in the refloating.

According to Mr O’Connell, there have been 25 recordings of Sowerby’s Beaked Whales being stranded on Irish beaches since records began and this is the fourth this year, with strandings of dead animals recorded in Donegal, Mayo and Sligo since February.

“We have had three strandings already this year but this is the first live stranding and only the third live stranding of a Sowerby ever in Irish waters – we had one in Wexford in 2004 and another in Kerry in 2015,” he said.

According to Professor Emer Rogan of the Department of Zoology at University College Cork – and member of the Irish Whale and Dolphin Group – Sowerby’s Beaked Whales, which are named after English naturalist, James Sowerby, are a deep-diving species that usually live at depths of between 250m and 1,000m.

“Sowerby’s Beaked Whales are a species that we don’t know very much about. They are one of the very cryptic species, they can grow up to five metres and live off meso-pelegaic fish. Tthey have very little, if any, teeth and they kind of suck their food in through muscles at the back of their throat.

“They live in very deep waters and certainly in terms of Irish waters, they are found off the edge of the Continental Shelf off the west coast of Ireland, so for one to end up in the Celtic Sea and getting stranded in Waterford is certainly highly unusual and one for the records.”