Up to 60 cars scorched in ‘accidental’ Cork car park blaze

The scene on Sunday morning in the Douglas Village Multi-Storey car park where more than 60 vehicles were damaged in a large fire. Video: Cork Fire Brigade 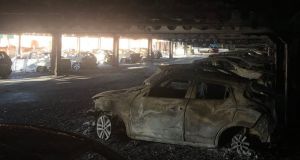 The scene on Sunday morning in the Douglas Village multistorey car park where over 60 vehicles were damaged in a large fire. Photograph: Cork Fire Brigade via Twitter

Gardaí are satisfied a blaze which caused millions of euros of worth of damage and destroyed up to 60 cars at a multi-storey car park in Cork started accidentally.

A Garda technical team entered the building on Sunday morning and were able to trace the source of the blaze to a people carrier which caught fire in the central parking block on Level 1.

Supt O’Sullivan said the car’s owner had spotted it on fire at about 6.30pm and raised the alarm. Security personnel sealed off the parking area and began evacuating the shopping centre.

“We can trace the source of the fire to a people carrier but until such time as we can identify the chassis number from that vehicle we cannot positively identify the make of the vehicle involved,” he said.

Supt O’Sullivan said Garda technical teams were able to trace the source of the fire to the people carrier from the damage to the roof area immediately overhead which suggested it was the longest burning area in the block.

However, the building has been deemed structurally unsafe for Garda technical experts to examine the burnt out vehicle in situ and it may take some time before the people carrier can be removed for a full technical examination.

The blaze then quickly spread to other cars in the area.

“The fact that there was no one injured in this blaze is down firstly to the prompt response of the security staff who began evacuating everyone immediately once they realised there was a fire – that was critical and great credit is due to them for getting everyone out,” he said.

Supt O’Sullivan said firefighters from Cork City and County Fire Services entered the car park and contained the blaze despite the high temperatures and poor visibility.

“A team of firefighters went in with breathing apparatus and they were able to limit the spread of the fire even though they had to retreat for a time, crawling out on their knees and following their hoses because visibility was so poor. They did tremendous work.”

Mr Spillett said about 50 personnel were involved in fighting the fire after being notified of it at 6.48pm on Saturday and eight tenders, three hydraulic platforms, two control units and a water tanker were deployed to bring it under control.

“We spent three hours before we got a good grip on it and then we spent the night damping it down. There was significant damage caused to 60 cars as well as to some steel beams. We estimate temperatures hit 600 to 1,000 degrees centigrade to cause them to warp.

“We got access to Level 1 through firefighting shafts from the ground floor. We had several jets down on the fire from both the city side and Church Street side. We had personnel in at the start but we withdrew them for safety reasons but we recommitted once it was safe,” he said.

“It was one most severe fire incidents that we’ve had in Cork but also one of the most severe incidents in a multistorey car park in Ireland. Cars are parked very close together in multistoreys and once fire spreads from one car to two or three, it’s very hard to control.”

The shopping centre is home to some 50 shops and while most of the damage was in the car park, the retail ground floor suffered collateral incidental smoke and water damage.

Douglas Village Shopping Centre manager Bartosz Mieszela said the centre, in which some 400 people work, would remain closed on Monday. He added that it was too early yet to say when it would reopen as structural engineers are still assessing the damage.

He said about 130 cars not damaged in the fire remain in the car park and the centre is making arrangements to try and get them lifted out as the exit ramps have been compromised and are unsafe.