Limited edition guitar was custom built for the Irish-born bluesman 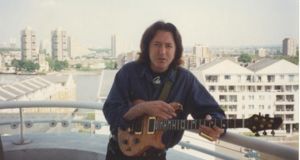 Rory Gallagher with the guitar

A limited edition electric guitar specially crafted for Irish-born blues and rock legend Rory Gallagher will go for auction in the UK tomorrow and is expected to fetch between £15,000 (€18,150) and £20,000.

The JS Berlin Legend made by British luthier Patrick Eggle was custom built in 1992 for the Ballyshannon-born and Cork-raised guitarist who first made headlines with his band Taste in the late 1960s before becoming a solo artist with album sales of over 30 million worldwide.

According to auctioneer Kevin Kendal of 1818 Auctioneers in Cumbria, who are selling the guitar, the instrument was built to suit Gallagher’s playing style and is distinguishable by its gloss finish and the initials ‘RG’ on the 12th fret of the fretboard.

“Rory Gallagher combined fierce fret work, a rugged voice and a love of the blues, rock ‘n’ roll, folk and R&B, to forge a sound all his own” said Mr Kendal who said a lot of interest was expected from Gallagher fans.

“It’s not known if Rory ever used the guitar for any public performances, but it features in pictures of Rory which accompanied his CD Big Guns - The Very Best of Rory Gallagher and the DVD Ghost Blues, he added

Gallagher, who was once described by Jimi Hendrix as the world’s greatest guitarist and was credited by Eric Clapton with getting him “back into the blues”, was renowned for his live performances in Ireland, Europe and the United States.

Mr Kendal said that the seller of the guitar wants to remain anonymous but that he was friendly with Gallagher, and that the instrument was given to him by Gallagher’s brother Donal following the guitarist’s death in June 1995 at the age of 47.

Gallagher was known for playing a battered sunburst Fender Stratocaster as his sweat reacted to the lacquer on the guitar and caused its finish to peel, but the JS Berlin Legend guitar is notable for its fine maple finish and mother-of-pearl inlay.

“It has a slightly higher action than many electric guitars as this was Rory’s preference, “ said Mr Kendal who revealed that Patrick Eggle played one of Gallagher’s best known songs Messin with the Kid on the instrument before it left the factory.

Eggle has been building accoustic and electric guitars since he was 15 and has made custom built guitars for, among other artists, Brian May of Queen, who cited Gallagher as an influence, and Tony Iommi of Black Sabbath.