The Irish Quidditch Cup took place in Dublin and the winners of the Harry Potter inspired game would go on to represent Ireland in the Quidditch European Cup. 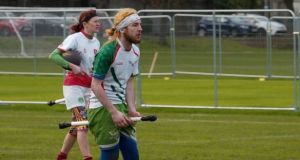 Twenty-five years ago the word quidditch barely existed in the English language. Today, not only is this term instantly-recognisable to legions of Harry Potter fans as the primary sport in J K Rowling’s wizarding world, but it has also evolved into a real-life, international sporting activity.

Quidditch started out in the early 2000s as a sporting activity for American Potter-aficionados eager to recreate the magical broomstick competitions from their childhood tales. However, over the years the sport, which consists of athletes running around with a broom between their legs, has become a popular game among students and Potter enthusiasts alike.

On Saturday morning, players from around Ireland gathered on the cricket pitch in Trinity College to hold the annual Irish Quidditch Cup to select a team to travel to Poland in April to take part in the European quidditch games.

Philip Moore, a member of the Dublin Draíochta Dragons and head coach of the Irish national quidditch team, says the sport has continued to evolve since college students in the United States first began holding matches in 2005.

“Every couple of years we have a new rule book because things change. The pitch used to be round like in the books but we’ve decided it’s more convenient to have it squared. Elements of the sport from the books are still here; we still have bludgers and beaters and the golden snitch.”

Mr Moore describes the game as a mix of handball, rugby and dodge ball, adding that it’s “very community orientated” and “extremely inclusive”. One of the primary rules states that a team – consisting of 21 players but with only seven allowed on the pitch at any one time – can only have four people of one gender playing during the match.

“For people who are non-binary or agendered, however that person identifies themselves, they are marked down as that gender by the referee. It’s become very popular with the LGBTQ community because of this. It’s very rare that a trans person can play as a man or a woman, however they choose.”

The International Quidditch Association describes the game as a mixed gender contact sport played by more than 500 teams in more than 26 countries worldwide. It says the sport seeks to improve gender education across sport while promoting equality, diversity, leadership and physical activity. In July 2017 the Irish national quidditch team participated in the European Quidditch Cup in Norway, joining teams from across Europe including Austria, Italy, Poland, Slovakia, Turkey, Germany and the UK.

Sebastian Steinke from Germany travelled to Dublin this weekend especially to take part in the Irish quidditch event. He first started playing the game because of his love of the Harry Potter books but quickly discovered a real appreciation for the wizarding sport. “It’s an intensive sport but very inclusive which is something I really like about,” Mr Steinke told The Irish Times. “It doesn’t matter who you are or where you come from. It’s a sport for everyone and a very open-minded community.”