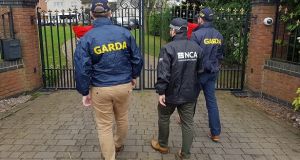 One of two members of the Kinahan crime cartel arrested at Birmingham airport as part of an investigation by the Garda and UK’s National Crime Agency has been released on bail.

The suspects, one of whom has been a prime target of the Garda for decades, were detained in connection with the supply of drugs and firearms in Ireland and the United Kingdom on Saturday morning.

A 51-year-old man still in custody was arrested on suspicion of conspiring to import and supply drugs, firearms and ammunition. He is also being questioned about money laundering offences. He was arrested on arrival at the airport .

“At the same location a second man, aged 20, was arrested on suspicion of money laundering offences,” the National Crime Agency said.

Garda members were on the ground in Britain on Saturday and Sunday as the British police moved in to carry out the arrests and search properties.

Both men are from Dublin and they are well known to each other. They are both from the same extended family in Ireland.

The 20-year-old man was released on Sunday morning.

A number of members of the family have been heavily involved in gangland crime.

The eldest of the two suspects now in custody in Britain is a senior figure in the Dublin-based section of the Kinahan cartel. He has previously been targeted by the Criminal Assets Bureau and has spent a prolonged period living in Spain.

As well as being a senior figure for the Kinahan cartel, the older suspect has served a number of prison sentences in Ireland. He has convictions for firearms offences, assaults and threats to kill, among others.

One of the other leading figures in the Kinahan cartel’s Irish group that the 51-year-old is close to has been living in the British midlands of late.

As the feud has worsened and the murder count has risen, the threat to the main gang members on both sides of the feud from each other and the Garda has greatly increased.

And a number of gang members from each faction have left the Republic for Britain and continental Europe as the feud shows no sign of abating.

In the past week, a number of vehicles and an inner city Dublin property owned by members of the Hutch family with no involvement in crime were targeted by arsonists in suspected feud-related attacks.

The arrests of the two Irish men in Britain on Saturday is the latest in a series of joint operations between the Garda and police forces in Britain, the Middle East and Continental Europe targeting the Kinahan cartel for over a decade.

Speaking on Saturday Assistant Commissioner John O’Driscoll, who is in charge of Special Crime Operations including the Garda units that tackle organised crime, said his officers were determined to maintain the pressure on organised gangs.

“For the purpose of tackling organised crime groups An Garda Síochána has commenced the New Year in the manner in which it intends to proceed in 2019, by engaging in the most impactful possible co-operation with law enforcement authorities, at an international level,” he said of the arrests in Britain.

“In this regard the UK National Crime Agency is one of our most important allies, with whom we share a common desire to put organised crime groups who operate within the common travel area out of business.”

Mr O’Driscoll added that the force will not make any comment regarding any particular operation which is ongoing.

As part of the latest operation, NCA officers, supported by colleagues from Staffordshire Police, are also searching a property in the Tamworth area and a business premises in Birmingham.

“The arrest and searches are part of an investigation into the activities of an organised crime network alleged to be involved in the supply of drugs and firearms,” the NCA said.

“The men are currently being questioned at a police station in Staffordshire. No further information is available at this stage,” the agency said.

O’Doherty and Waters to pay legal costs of case against State over Covid-19 laws, judge rules