In this archive video from 2014, Catherine Corless, the Tuam local historian, claimed that there are nearly 800 babies buried in a grave site on land previously occupied by a Sisters of Bons Secours mother and baby home. Video: Bryan O'Brien 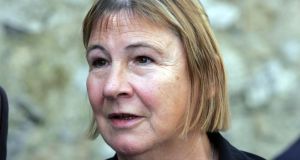 The Mother and Baby Homes Commission of Investigation is to seek an extension of one year before publishing its final report, which was due next month.

The Irish Times understands the request has gone to the Government and is expected to be discussed by the Cabinet next week.

It is believed the request is a result of the workload involved in investigating such institutions over the period from 1922 to 1998.

Mother-and-baby homes were generally institutions run by nuns where women who became pregnant outside marriage gave birth. In the main these babies were adopted, frequently by Catholic families in the United States, in return for donations.

The commission was set up following revelations in 2014 by local historian Catherine Corless about the deaths of almost 800 children at the Tuam mother-and-baby home in Co Galway. Its remit was extended to examine the records of and practices at an additional 13 such homes as well as four county homes.

The commission, set up in 2015, was originally due to publish its final report last February but it was granted a one-year extension by the Government. Its three members are Judge Yvonne Murphy, Prof Mary E Daly and Dr William Duncan.

Ms Justice Murphy previously led the commission which investigated the handling of clerical child sex abuse cases in Dublin’s Catholic archdiocese and later had its remit extended to include the Cloyne diocese.

Prof Daly is president of the Royal Irish Academy and former professor in Irish history at UCD. Dr Duncan was professor of law at Trinity College, Dublin, and was a member of the Law Reform Commission.

In an interim report in 2017, the commission said “significant quantities of human remains have been discovered in at least 17 of the 20 underground chambers which were examined” at the Tuam site.

The remains “involved a number of individuals with age-at-death ranges from approximately 35 foetal weeks to two to three years. Radiocarbon dating of the samples recovered suggests that the remains date from the timeframe relevant to the operation of the mother-and-baby home (the mother-and-baby home operated from 1925 to 1961; a number of the samples are likely to date from the 1950s)”.

It was “shocked by this discovery” and was continuing its investigation “into who was responsible for the disposal of human remains in this way”.