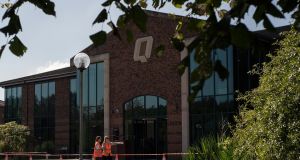 Two Quinn Industrial Holdings directors advised a Facebook group that campaigned to restore Sean Quinn to the business in 2011 in a bid “to stop it being broken up,” a company insider said.

Emails have emerged showing that an online group calling themselves Concerned Irish Citizens received advice from Kevin Lunney and John McCartin, who are now directors of the building materials company, on their campaign to support Mr Quinn after the loss of his group in the financial crash.

Mr Lunney was abducted outside in his Fermanagh home in September and tortured by a gang acting on instructions to force him and other QIH directors to resign from the business.

The 2011 emails, as reported by the Sunday Times, show Mr Lunney and Mr McCartin giving advice to the group’s spokeswoman Patricia Gilheany on what to discuss on media appearances in the months after the former Anglo Irish Bank seized control of Mr Quinn’s group on the Cavan-Fermanagh border.

On one occasion in 2011, Mr Lunney advised Ms Gilheany ahead of her appearance on RTÉ’s phone-in radio show Liveline to talk about job losses and the heavy spending of public money by the nationalised bank in pursuit of Mr Quinn over his debts to the lender.

In another email, Mr McCartin encouraged Ms Gilheany to keep up the pressure she was putting on Paul O’Brien, the executive installed by the bank-appointed share receiver to run the business and oversee the sale of certain assets within the group.

Mr McCartin, a former Fine Gael councillor, was in contact with Ms Gilheany at the time about efforts to establish the Quinn Business Retention Company, a group set up to retain ownership of the companies within local management in the Cavan-Fermanagh area.

In one email, he told Ms Gilheany that he believed they had “O’Brien under pressure” and that there was a “great ‘good cop, bad cop’ thing going on between QBRC and CIC.”

A QIH spokesman said management’s consistent position - before and after the firm was set up and both in private and public - was to retain the businesses in the locality under local management.

“That objective provides zero justification for those who engaged in self-serving intimidation and criminality, and who must now face the full rigours of the law,” said the spokesman.

A source close to the company said the emails portrayed attempts to prevent the company being sold off piecemeal and reflect a period when Mr Quinn and his former managers had common interests, before they fell out.

“This was back in the early days when we were trying to keep the company together and to stop it from being broken up,” said one source familiar with the communications with Ms Gilheany.

The source said they believed the eight-year-old emails have surfaced now to “muddy the waters” around some QIH directors and their involvement in the campaign of support for Mr Quinn.

The public campaign in support of Mr Quinn’s return to t he group ran alongside protests objecting to his removal from the businesses.

The former Quinn businesses were - unconnected to the public protests - subjected to a years-long campaign of vandalism and intimidation against equipment and premises. This, in the last two years, escalated to violent attacks on former Quinn Group executives who for years reported to Mr Quinn.

This campaign of intimidation and violence was suspected to have been spearheaded by convicted criminal Cyril McGuinness, also known as Dublin Jimmy who died in a police raid in England earlier this month.

Mr Quinn and his family have consistently condemned the attacks on their former group and distanced themselves from the acts of violence that have been carried out in their name.

The emails from Mr Quinn’s one-time allies predate the falling out between the former billionaire and the rest of the local QBRC management team who took over the building materials part of his former group in December 2014.

Mr Quinn was initially retained as an adviser on €500,000 a year by Mr Lunney, Mr McCartin and the rest of the local QIH team who took over the management of the business on behalf of three US hedge funds.

He subsequently clashed with his former executives and left the business in May 2016.