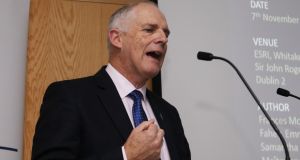 Minister of State for Immigration David Stanton said State-owned land could be used to provide direct-provision accommodation for the growing number of asylum seekers arriving in the country.

Vacated barracks and defence forces accommodation could be used to house asylum seekers in the future, the Department of Justice has confirmed.

The department is in talks with the Department of Defence about providing an alternative to the current direct-provision system which sees asylum seekers housed mostly in privately-owned hotels and apartment complexes.

It follows an interview with the Minister of State for Immigration David Stanton who told The Irish Times last week that State-owned land could be used to provide direct-provision accommodation for the growing number of asylum seekers arriving in the country.

According to documents obtained by RTÉ Radio 1’s This Week programme, the two departments began discussing the possibility of using Defence Forces property in January.

There is no indication in the documents of which locations could be chosen, but there have been a lot of barracks closure in the last decade including in Longford town, Mullingar, Letterkenny, Castlebar and Cavan.

The memos were obtained by RTÉ under freedom-of-information legislation. They are minutes of the meetings of the Department of Justice’s civil, justice and equality executive board.

In February the board noted that asylum applications were up 25 per cent on the previous year and the following month they discussed moving away from the procurement model of providing asylum accommodation.

Of the 39 direct-provision centres in the State, just seven are owned by State. The rest is sourced from the private sector.

Former High Court judge Bryan MacMahon, who chaired the 2015 working group report on direct-provision reform, says the only solution to the reliance on emergency accommodation is to build more centres on State-owned land.

The State has become increasingly reliant on emergency options for accommodating asylum seekers at a cost of €500,000 a week, according to a departmental spending review. It currently costs about €100 per person per night.

There were 3,762 asylum applications in the first nine months of the year, the highest level since 2008. There was a 20 per cent increase in demand for direct-provision accommodation last year and this is expected to rise to 40 per cent this year.

This has put a strain on the system compounded by the opposition of communities such as Oughterard and Ballinamore to the housing of asylum seekers in their local communities.