Q&A: How do new Covid-19 restrictions in the UK differ from Ireland? 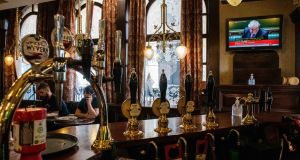 A TV screen in St Stephen’s Tavern displays a feed of British prime minister Boris Johnson making a statement in Parliament in London on Tuesday. From Thursday, hospitality venues across England will have to close by 10 pm. Photograph: Bloomberg

The UK has imposed a raft of new coronavirus restrictions for England that could last up to six months as deaths from Covid-19 are starting to increase for the first time since April.

British prime minister Boris Johnson has said the country was at a “perilous turning point.”

This means that there are varying Covid-19 public health restrictions applying across the United Kingdom and in different parts of the island of Ireland.

What are the main measures announced for England?

Pubs, bars and restaurants are being forced to close at 10pm from Thursday and will be restricted to table service only. Table bookings are limited to six people and groups cannot mingle.

People are being advised to work from home, where possible, and face masks are being made compulsory for bar staff, non-seated customers, shop staff and waiters.

The number of guests permitted at a wedding has been reduced from 30 to 15 and the number of people allowed to participate in indoor team sports has been limited to six. The UK government’s plan to allow spectators at sporting events has been postponed.

How do Northern Ireland’s restrictions differ?

Are there any exceptions in Northern Ireland?

Yes, one household can “bubble” with another, which means the two can have close physical contact. This allow two households to help adults living alone or single parents with children.

Other exemptions include for care responsibilities, including childcare, building work, legal or medical visits, a funeral or where people are operating a business from home.

The Northern Ireland Executive has not announced a curfew on so-called wet pubs, which are due to open in the North on Wednesday as it has been imposed in England but the measure is due to be considered by the Executive on Thursday.

What is happening in Scotland that is different to England?

Scottish First Minister Nicola Sturgeon has, like in Northern Ireland, announced a ban on meeting inside other people’s homes and has permitted up to six people from two households to meet outdoors, including in private gardens, though young people aged 12 to 18 are exempt and can meet outdoors in groups of up to six. The Scottish government is not applying any limit on the number of children under 12 who can meet or play together outdoors.

How do the UK measures differ from the approach here?

It depends on whether you are living inside or outside Dublin, which is on the more restrictive Level 3 measures compared with Level 2 for the rest of the country.

How does the approach to pubs differ?

Unlike in Northern Ireland and the rest of the UK where pubs can remain open with restrictions, wet pubs were not allowed to reopen in Dublin as proposed on September 21st and indoor dining was banned in food pubs, cafes and restaurants in Dublin due to rising coronavirus infections. Outside of Dublin, wet pubs were permitted to reopen but with table service and groups of people limited to six from no more than three households. Food-serving pubs, cafes and restaurants, including hotel restaurants and bars, can reopen with protective measures in place.

In Dublin, numbers at weddings are limited to 25 and to 50 in the rest of the country. The number of wedding guests in Northern Ireland can be a multiple of that based on a risk assessment on the size of the function room while adhering to social distancing guidelines, public health advice and industry guidance.

Is Northern Ireland closer to the British or Irish response?