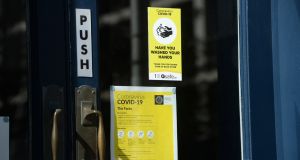 The number of people being treated in hospitals here for Covid-19 increased on Tuesday morning to 94. Photograph: Dara Mac Donaill

Ireland has one of the highest rates in western Europe of Covid-19 infections among older people, according to data from the European Centre for Disease Control.

The rate of cases among 65-79 year-olds in Ireland was nine times that of Germany, while for those aged over 80, it was 17 times higher, the ECDC figures for early September show. Germany was one of the countries that coped comparatively well with the first surge in the pandemic by limiting infections, and deaths, among older people.

Among those aged 80 and over, Ireland ranked sixth in Europe for the 14-day incidence of Covid per 100,000 people, behind Malta, Spain, Bosnia, Romania and North Macedonia.

Among 65 to 79-year-olds, Ireland ranked eighth behind the same countries, the Czech Republic and Croatia.

The figures relate to the week of September 5th-12th; since then, cases have continued to rise in Ireland and most European countries.

The high rates of cases among older people in Ireland may be related to the fact that serial testing is being carried out in nursing homes.

The data shows Ireland ranked seventh in Europe for testing, with 1,525 tests carried out per 100,000 population. We were mid-table for overall incidence of the virus and below average for our death rate.

Meanwhile the number of people being treated in hospitals here for Covid-19 increased on Tuesday morning to 94, from 90 the day before. ICU numbers were stable at 16.

In Dublin North West, the worst affected part of the capital, the 14-day incidence of the disease now stands at 204.7, according to the latest epidemiological report from the Health Protection Surveillance Centre.

The least-affected area is Dublin South, with an incidence of 60.5.