Trees can grow 60ft high and block light, says campaigner who is surrounded by the trees 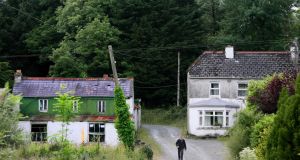 Adrian Kelly near Cloone in Co Leitrim, which is surrounded by forestry plantations. Photograph: Brian Farrell

Farmer Jim McCaffrey has fought three battles against forestry plantations near his land in Co Leitrim – and has lost each time.

“I’m surrounded by plantations on three sides, and if there wasn’t a lake there, it would be on four sides,” the 64-year-old says.

McCaffrey, a member of the Save Leitrim campaign group, lost a High Court action in 2017 opposing the most recent Sitka spruce plantation near his home.

“If I had the money I would have appealed it to the Supreme Court and to the European Court of Justice,” he says.

McCaffrey, a suckler farmer, is the fourth generation of his family to work the 23-acre holding at Adoon near Cloone village. He says his opposition is in the interest of the next generations, with his son and grandchild also living on the land.

Save Leitrim and McCaffrey say people do not realise that Sitka spruce trees can grow to more than 60ft tall, which means properties surrounded by them are closed in.

“The trees affect your light and your view and you lose connectivity,” he says. “I can no longer see rolling hills or my neighbour working on his fields ... There was a time when I could see the road to Cloone from my patio door. I could tell my children when the school bus was coming. You can’t see that road any more.”

Things will be even worse in 10 years’ time when the latest plantation matures, he says.

The group believes that those planting the trees do no live locally and do not feel the impact of their presence. It disputes the findings of a survey carried out for the Department of Agriculture that found 70 per cent of the county’s forest owners were resident in the county.

They argue that the survey did not include State or semi-State companies and say their own research in two heavily planted areas suggested that 16 per cent of forests in Cloone were locally owned, rising to 25 per cent in Aughavas.

Save Leitrim recently took a High Court challenge against a decision to allow what it claims is an “alien species” of tree to be planted on a 13.3-hectare site at Meenymore, Dromahair.

It argues that Sitka spruce plantations of this kind obliterate the landscape and leave large tracts of afforested lands that are “dark, foreboding and eliminate all life on the forest floor”.

“And after they fell the trees, it is like Armageddon,” says McCaffrey.

The planting is having a negative impact on farmers too, he says, as they cannot compete with forestry companies on price when land goes up for sale.

McCaffrey maintains that large-scale plantations of Sitka spruce have nothing to do with alleviating the impact of climate change.

It has been estimated that 20 per cent of Leitrim has been planted, and Save Leitrim says big farmers from other parts of the State are buying land in the county to plant trees in order to offset their carbon emissions so that they can increase their dairy herd sizes.

“It’s all about money, money, money and it is taxpayers’ money, which is supporting these investors,” he said.

Edwina Guckian, a founding member of Save Leitrim, says forestry companies and concerned communities are being “pitted against each other” when they should be working together for the betterment of the community.

The Government has this week moved to speed up the process of granting forestry licences after a warning from semi-State firm Coillte that delays in the system could cause timber shortages and jeopardise thousands of jobs.

“We understand that [Minister of State for Land Use] Pippa Hackett is under massive pressure and the last thing we want is for thousands of jobs to be lost,” Guckian says.

However, she says deciding on each individual forestry licence is like considering the parts of a jigsaw puzzle without seeing the whole picture.

“We are pleading with Minister Hackett to come here and see the impact of the afforestation.”

1 One hundred Irish retailers for all your online Christmas shopping
2 Covid-19: Pressure over breakdown in tracing system intensifies as State enters Level 5
3 Miriam Lord: All test and no trace makes Jack, and heaven knows who else, a very ill boy
4 Nearly 400 Brazilians have tested positive for Covid-19 in Ireland, data shows
5 Gym owner plans to defy restrictions and open
Real news has value SUBSCRIBE