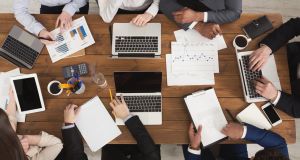 Talks between the public service unions and the Department of Public Expenditure on a review of the pay terms set out in the agreement for State employees has taken place, say informed sources. File photograph: Getty Images

Public service unions have had discussions with the Department of Public Expenditure on a review of the pay terms set out in the agreement for State employees, informed sources have said.

Minister of Education Joe McHugh said on Tuesday he was aware that the parties to the Public Service Stability Agreement were engaged in exploratory discussions on a potential review of pay rates generally in the public service – based on a suggestion put forward by the Public Service Pay Commission last autumn.

Asked about the Minister’s comments, the Department of Public Expenditure on Wednesday replied: “We have no comment.”

The general secretary of the Association of Secondary Teachers Ireland (ASTI), Kieran Christie, said that after the recent settlement of the nurses’ strike there was “a basis to return to and amend the terms of the current public service pay agreement so as to ensure a fair distribution of benefits”.

He added: “I believe that the Public Service Stability Agreement has been stretched beyond its limits and it now needs to be rebalanced for all public servants. To me it seems like a statement of the blindingly obvious and I expect to see it being addressed in the near future. A midterm pay review must happen. Certainly, it is the message we in ASTI will be transmitting forcibly in our conversations with colleague public sector unions within the Irish Congress of Trade Unions. ”

Separately, delegates at the ASTI conference in Wexford passed a motion overwhelmingly demanding that teachers who took part in supervision and substitution arrangements in schools be paid for carrying out these duties.

Delegates argued that teachers who do not carry out supervision and substitution duties should not in future experience deductions in salaries for opting out of these arrangements.