Members of the Irish Farmers’ Association (IFA) protest outside AIB's annual general meeting in Dublin to oppose the bank's sale of loans to vulture funds. 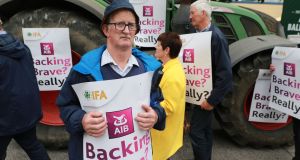 Denis O’Brien from Mitchelstown, Cork at the IFA protest held outside the AIB agm in Dublin on Wednesday. Photograph: Nick Bradshaw

The Irish Farmers’ Association has said its members will boycott the sale of repossessed farms put on the market by so-called vulture funds.

The IFA, which held a protest outside the AIB annual general meeting in Dublin on Wednesday, said the bank was including the debts of “genuine” debtors who were making an effort to repay their debts in recent loan sales to “vulture funds”.

The IFA said the organisation would support debtors who made full disclosure of their financial situation to the organisation, and who had seen their loans sold despite co-operation with the banks.

Martin Stapleton, chairman of the IFA farm business committee, said buyers such as Everyday Finance – the subsidiary of Cerberus which purchased AIB’s last tranche of non-performing loans, including farm debt – had no interest in reaching long-term arrangements with farmers.

If a repossessed farm was put on the market, he said “in effect we will boycott any proposed sale. We have done so in the past and we will do so again”.

Such a move would depress the value the purchaser of a book of bad debt might be able to realise on its investment, and the threat in turn could mean AIB would struggle to shift the problem debts off its balance sheet.

“None of our members would buy that farm, so in actual fact, [it would] make the farm valueless,” Mr Stapleton said.

He emphasised that the IFA would closely investigate the bona fides of any borrower seeking its support. Richard Kennedy, deputy president of the IFA, said the organisation would not support strategic defaulters.

“We’re not supporting anyone who doesn’t want to pay their loans, but there’s serious hardship out there on farms throughout the country. This from a bank that purports to support farming is totally unacceptable.”

The IFA said up to 130 farm loans were included in AIB’s most recent loan sale, Project Beech. The bank has around €180 million in non-performing agricultural exposures, according to Investec senior bank analyst Owen Callan, compared to a total agriculture loan book across the UK and Ireland of just under €1.9 billion.

One Limerick farmer who spoke to The Irish Times described how €1.2 million in boomtime borrowings of his had recently been sold by AIB to Cerberus as part of Project Beech.

The farmer, who did not wish to be named, said that he had been keeping up with repayments on the loan, “but it came to the stage where I couldn’t make repayments any more, because I could never pay it off”.

He argued that the bank was not clear about the security he had offered when he borrowed the money originally. “They never told me they could get a judgement against me, effectively come back and take my house and take the cutlery off the table if it came down to it,” he said.

“The farm has been in my family for a few hundred years. It’s devastating. It’s terrible; my family would be devastated over it as well.”

Mr Stapleton strongly criticised the bank over the way it handled the most recent sale of loans. “I know from working with our members that the case is they have sold when people were engaged in a negotiating process, those loans have been sold mid-stream.”

A further loan sale from AIB is expected before the end of the year. Market sources said €500 million in bad debt had been removed from the bank’s last NPL sale after borrowers upped their engagement with the bank.

“We have the option of engaging in portfolio sales,” he said, adding “the key message is we want to engage with out customers. Please engage with us.”

Mr Hunt’s office, AIB said, has been engaging with the IFA on the issue of farm debt sales.

Meanwhile, AIB confirmed that a member of the security detail working at the AGM was injured as protesters entered the lobby of the hotel.

The IFA protesters had been peacefully gathered outside and entered the Ballsbridge Hotel as the AGM was on, but did not enter the AGM proper. They gained access to the lobby despite the presence of the security detail, made a short statement and left again.

It is understood that the security guard was hospitalised as a precautionary measure, however the bank said it would not comment further on the circumstances of the injury. The IFA said it had no comment.