‘Why did it take murder of a young woman for politicians to act?’ priest asks 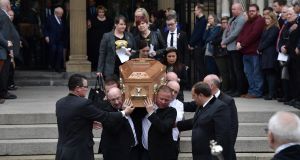 The coffin of journalist Lyra McKee is removed after her funeral at St Anne’s Cathedral in Belfast. Photograph: Charles McQuillan/Getty Images

A priest at the funeral of Lyra McKee in Belfast on Wednesday asked “why in God’s name” it took her murder to bring politicians to a point where they may seek to resolve their differences.

Fr Martin Magill, a friend of McKee and of her north Belfast family, spoke about the murdered journalist’s qualities when he delivered the homily at her ecumenical funeral service in St Anne’s Church of Ireland cathedral at lunchtime on Wednesday. She was shot dead by members of the New IRA while covering a disturbance in the Creggan area of Derry last Thursday evening.

The chief mourners at the funeral were McKee’s mother Joan, her partner Sara Canning, her sisters Joan, Nichola and Mary, her brothers Gary and David, nieces and nephews and great-niece Ava.

Some hundreds of people gathered outside St Anne’s clapped in solidarity as the coffin was carried into the cathedral. The wreaths at the funeral included a heart of pink and white flowers and wreaths made up of the rainbow colours symbolising the LGBT community.

Fr Magill spoke about Lyra’s warmth, her love of her family, writing, and Harry Potter, of her “determined doggedness”, and of her love of life and fun. However, Fr Magill also had stern words for her New IRA killers and also for the politicians who have contributed to the political paralysis and pessimism in Northern Ireland.

“Many of us will be praying that Lyra’s death in its own way will not have been in vain and will contribute in some way to building peace here. Since Thursday night we have seen the coming together of many people in various places and the unifying of the community against violence,” said Fr Magill.

“I commend our political leaders for standing together in Creggan on Good Friday. I am, however, left with a question: ‘Why in God’s name does it take the death of a 29-year-old woman with her whole life in front of her to get us to this point?’”

The priest received a spontaneous standing ovation after delivering that challenge.

He added: “I dare to hope that Lyra’s murder on Holy Thursday night can be the doorway to a new beginning. I detect a deep desire for this.”

‘Pen mightier than the sword’

To those who had any part in her murder, Fr Magill said: “I encourage you to reflect on Lyra McKee, journalist and writer, as a powerful example of ‘The pen is mightier than the sword’. I plead with you to take the road of non-violence to achieve your political ends.

“It was encouraging to see that those who provide a political analysis to the organisation responsible for her death chose to call off their parade on Easter Monday following the call from Fr Joe Gormley, the parish priest in Creggan, where Lyra was killed. To those still intent on violence, I ask you to listen to the majority of the people on your beloved island of Ireland who are calling on you to stop.”

Fr Magill also paid tribute “to the courage and determination of the women who in a very powerful gesture of non-violence one by one placed their hands in blood red paint on a wall” of the office of dissident republicans in Derry and said loudly “we are not afraid”.

He commended, too, the more than 140 people in Creggan who broke the imposed local rule of silence by contacting the police about the murder.

He said: “But that was one of a number of rules – rules that also said that it was okay to brutalise children for petty crimes, or rules that say you can live in the locality until you are told you can’t or rules that said that the only way we could gain ‘freedom’ was by other fellow human beings losing their lives.

“But this week I have seen these rules turned on their head. I have seen many people stand up and condemn this culture of violence and coercive control. We need to send a very different message and so I appeal to those who have information about Lyra’s murder but who haven’t yet come forward to do so now.

“If you want to see an end to these brutal rules, and see a new society built on justice and fairness, on hope and not fear, then you can help build that society by letting the police know what you know.

“There will be special measures put in place to ensure your safety and where you will not be intimidated by coercive controllers, if you do so.”

Fr Magill, who was a priest in the McKees’ parish near Ardoyne in north Belfast and is now parish priest in St John’s in west Belfast, spoke of deprivation and how young people need jobs, and education and training.

He added: “All our young people need a life that gives them an aspiration for the future. As our politicians we need you to be working together to make that happen, so that, especially for those living in deprived areas, that they will feel the peace process is working for them as well – and especially for young people living in these communities.”

Fr Magill said: “I know you as politicians have a very difficult job, but then so too did Lyra. There is another valuable lesson from her life – she was like ‘a dog with a bone’ when she believed she could make a difference.

“When it comes to our peace process, I would love to see this dogged attitude to the rebuilding of an Assembly that works for the common good. As I listen to the radio every morning, all I seem to hear about various initiatives in Northern Ireland are these words: ‘Without a minister, this can’t be taken forward.’ I pray that Lyra’s murder may be the catalyst needed for parties to start talking, to reform that which was corrosive in previous assemblies and to begin anew.”

While Fr Magill delivered these hard messages, he also spoke of McKee’s personality, and of her generosity, drive, ambition and general lovability.

He had not been aware of her interest in Harry Potter, he confessed, or of her favourite house Hufflepuff, which was the most inclusive of the Hogwarts school, valuing hard work, dedication, patience, loyalty, and fair play.

“It struck me that the definition could just as easily have been about Lyra,” he said.

Fr Magill also told the packed congregation that his last exchange on Twitter with McKee was at the end of March when she sent him a photograph of herself dressed in a nun’s veil with a glass of cider accompanied with the words: “Got roped into performing as part of a Sister Act tribute act for Foyle Hospice. Hey @MartinJMagill, you need any help with Mass tomorrow?”

Fr Magill told mourners of how after a rough period early at school she flourished when she developed a love of writing, first inspired by Roald Dahl’s The Twits, and then by “her granny Patricia Lawrie buying her each of the Harry Potter books as they were published”.

And he spoke too of her writing success, her letter when she was 24 to her 14-year-old self about growing up gay in Belfast, her book about the murder of Belfast South unionist MP Rev Robert Bradford, and her work on a book, The Lost Boys, about two boys who went missing during the Troubles.

Fr Magill said: “In the course of her investigations, Lyra had discovered that other children had disappeared and she had wanted to find their bodies. I pray that her work will be taken up and that their bodies will be found, and even more importantly that there will be no more ‘lost boys’ or ‘lost girls’.”

McKee’s sister Nichola Corner, older by 15 years and her godmother, remembered first seeing her as a baby and how their “souls called out to each other” and how they “fused in love from that moment on”.

She described how McKee was deeply loved within her family by her mother, brothers and sisters, nephews, nieces and grand-niece Ava.

Ms Corner also paid tribute to McKee’s partner Sara Canning, who was her sister’s “love of her life”.

Ms Corner also told the congregation about the special love McKee and her mother Joan felt for each other.

“While a broken heart can never be mended and an empty space can never be filled, the unconditional love they shared with each other will continue for eternity,” she said.

He said she was a woman who could be “fearless and naive in equal measure” and also funny in asking random questions of him, such as which was closer, Londonderry or Derry, and “why do Protestants eat more vegetables than Catholics”.

Mr Lusty also told of how he introduced her to late minister for finance Brian Lenihan when she was going though her phase of trying to develop various projects and how afterwards a very impressed minister had said he would rather “do 10 rounds with Ian Paisley . . . than do that again”.

When she asked him how to impress “hot girls” she was disappointed to receive from him a copy of a Delia Smith cookbook, although Mr Lusty felt it was a very good present considering her lack of culinary skills.

Mr Lusty told mourners that McKee had intended to propose next month to her partner Sara.

Mr Lusty said that McKee proved a great friend to him when he was going through a period when he was “scared, lonely and isolated”.

He also spoke of how he was from a generation when the punk hit of the late 1970s was Stiff Little Fingers’ Alternative Ulster. Mr Lusty urged: “Adopt her spirit and example and vision and build an alternative Ulster that we and our children can be proud of.” (Additional reporting: Reuters)