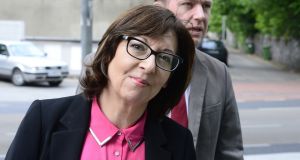 CEO of the IMO Susan Clyne said she believed a strike ballot will be held in coming weeks. Photograph: Cyril Byrne

The State’s public health doctors are set to ballot for strike action in a long-running battle with the Department of Health to secure consultant-grade contracts.

The Irish Medical Organisation (IMO) is to convene a national meeting of public health specialists on Monday, which is likely to consider when such a vote would take place.

The IMO’s public health doctor committee met on Friday following a “deeply disappointing” meeting with the department earlier in the week over reform plans. The doctors’ representative body has been campaigning for public health to become a consultant-led service and for public health specialists to be awarded consultant contracts to reflect their skills.

Public health specialists earn €113,822 at present. Hospital consultants with a type-A contract, which permits them to treat only public patients, have a pay scale ranging €141,026-€195,653.

Minister for Health Stephen Donnelly favours consultant-led public health and his department and the Health Service Executive are finalising a proposal that will go to the Department of Public Expenditure in mid-November.

Doctors wants all 60 existing public health specialists to be offered consultant contracts immediately, though they fear that the positions may be advertised over a phased period.

Last month the Cabinet approved new legislation that would allow for higher pay for some State employees, but the Department of Public Expenditure still fears “copycat” pay demands.

The chief executive of the IMO, Susan Clyne, said she believed a strike ballot will be held in coming weeks: “Public health members across the country are appalled by the fact that this matter remains unresolved.”

Claiming they are being “forced” into industrial action, she said public health doctors “are very mindful of their duties to the public, particularly at this time”, adding that the Government has a duty, too, to properly to fund public health.

“While we are aware that the Department of Health is developing proposals for future public health structures, that does not resolve the current issue of 60 specialists [who are] working consultant jobs but not on consultant contracts. The level of disrespect is astounding at any time but is particularly galling in the context of a pandemic. All our colleagues are asking is that the Government honour its commitment to implement the recommendations of the reports they themselves commissioned, including most recently the Crowe Horwath report and the Scally report.”

The Government is also facing potential industrial action by medical scientists. Members of the Medical Laboratory Scientists Association decided earlier this month to ballot for industrial action if progress was not made in a dispute over pay. No date for any ballot has yet been announced.