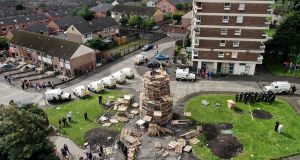 The decision to abandon a plan to facilitate the removal of a bonfire close to three nationalist tower blocks in north Belfast was taken in the interests of public safety, a senior PSNI officer said on Thursday.

There were a number of violent incidents close to the site of the bonfire in the New Lodge after police moved in to assist contractors who were due to remove the two-storey bonfire on Thursday.

Before the lighting of the bonfire on Thursday night officials from the North’s Housing Executive told residents to leave two of the blocks, Oisín and Fianna, as they could not “guarantee their safety, due to the proximity of the bonfire”.

Three officers were injured during the trouble, one officer being knocked unconscious when he was struck on his helmet by a youth who fired some form of missile at him at close range.

Six petrol bombs were recovered and a 13-year-old was arrested on suspicion of riotous and disorderly behaviour. Police are to examine CCTV footage to identify others involved in the disorder.

PSNI assistant chief constable Alan Todd, who was in charge of the police operation, said he regretted that he pulled his officers from the area after 3pm on Thursday, stating that he did so in the interests of public safety.

“I had three officers injured by mostly attacks carried out by young people but it is very clear to me that those young people were orchestrated in the background by older heads, probably related to violent dissident republican groupings,” he said.

Police in Land Rovers moved into the area early on Thursday morning. Their plan to allow contractors to remove the pallets and other material on the bonfire was disrupted when two youths climbed on top of the bonfire and refused to come down.

The standoff continued for several hours. One of the youths came down off the bonfire on which a tricolour was erected but two others broke through the police cordon around the bonfire to replace him.

Around 10am there were scuffles when some in the crowd threw fireworks and bottles and other missiles at police. In the second incident before noon the officer was knocked to the ground.

The vast majority of local people have told Sinn Féin and SDLP representatives that they opposed the bonfire which was erected to mark the introduction of internment on August 9th, 1971.

There were four nights of trouble in the area last week when some of those supporting the bonfire or involved in its erection rioted.

Graffiti also was painted on the wall of the North Belfast Family Centre in the New Lodge close to the bonfire warning, “Our wood goes, this centre goes”. More graffiti also appeared warning “contractors beware”.

Sinn Féin representatives such as Gerry Kelly and Carál Ní Chuilín took abuse from some of the youths when they tried to intervene on Thursday.

More than 150 officers in riot gear were involved in the operation. Their cordon around the bonfire was directly under the three tower blocks which made them vulnerable to attack.

Mr Todd said: “I regrettably had to take the decision that the risk of continuing the operation to remove a bonfire were outweighed by the risks that operation would then pose to the wider community, to women and children, and others there present.”

The assistant chief constable made indirect reference to journalist Lyra McKee who was killed in April during similar community violence in the Creggan in Derry.

“I don’t think anybody would welcome a press conference tomorrow morning where I had to use excessive police force to prove a point to somehow offset the people who will always make criticism of these operations,” he said.

Mr Todd said had police not pulled out “we would have had this evening large numbers of potential casualties, some of them seriously, in A&E wards up and down the country. I don’t think anybody would thank me for that.”

Mr Kelly said it was “disgraceful” that residents, many of them vulnerable, had to be advised to leave the blocks.

Mr Kelly said that the vast majority of the local community did not want the bonfire. “It has been built by antisocial elements, who torture this district throughout the year and many of whom are well known.”

Mark Lindsay, the chairman of the North’s Police Federation which represents rank-and-file PSNI officers said that “officers trying to protect the community and lawful agencies are once again caught in the middle and in the firing line”.

Separately, Ulster Unionist Party councillor David Taylor has condemned as “reprehensible and despicable” the organisers of an internment bonfire erected at Parkhead in Newry.

He said a number of items were placed on the bonfire glorifying the dissident republican murders of PSNI Constable Stephen Carroll and prison officer David Black and other republican killings.

The organisers also make reference to the recent death of William Frazer, who campaigned on behalf of victims of republican violence and whose father, Bertie, and four other members of his family were murdered during the Troubles, he said.