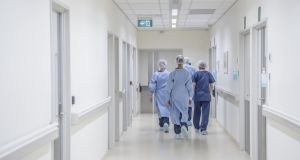 The proposed new public service pay agreement has been decisively supported by nurses but overwhelmingly rejected by doctors.

The vote by nurses to support the proposed agreement on Friday means that it is very likely to be formally ratified by the public services committee of the Irish Congress of Trade Unions (Ictu) at a meeting next Tuesday.

Members of the Irish Nurses and Midwives Organisation (INMO) backed the proposed deal by more than 91 per cent in a ballot.

Dr Paddy Hillery, chairman of the IMO’s non-consultant hospital doctor committee, said the agreement “doesn’t live up to the challenge of this moment and our members can’t support it”.

The IMO said that the proposed agreement did not recognise the new health service realities brought about by the Covid-19 pandemic nor address the long-standing grievances of doctors working in public health services.

Meanwhile, the INMO said: “This is a definitive result from our members. We held over 100 meetings in recent weeks. There is no doubt that the reduction in working hours, set out as part of the agreement, was of major importance for our members. That commitment must be dealt with comprehensively and within the lifetime of the agreement.

“Our members were also keen to see progress on pay owed to management grades from the 2019 strike.”

The decision by the public services committee of Ictu on whether to ratify the agreement will be based on an aggregate of the votes of its individual affiliates, with larger organisations having a greater weight.

As the proposed deal has now been supported by a number of larger unions, such as the INMO, the Services Industrial Professional and Technical Union and the Irish National Teachers’ Organisation, it is now very likely to have sufficient backing to secure formal ratification.

The country’s largest public service trade union, Fórsa, which has urged its members to back the proposed agreement, will announce the results of its ballot on Monday.

The agreement has been rejected by members of the IMO as well as the Association of Secondary Teachers in Ireland and the association representing medical laboratory scientists.

Chairman of the IMO’s consultant committee, Dr Clive Kilgallen, said: “Since the extraordinary failed policy of 2012, which imposed swingeing and unique salary cuts on consultants, we have had huge difficulties in recruiting and retaining consultants and this has led directly to long waiting lists for both inpatient and outpatient care, which now include over 270,000 patients who have been languishing on a waiting list to see a consultant for over 12 months.

Dr Ina Kelly, chairwoman of the IMO’s public health committee, said her members could not “support a pay deal which does nothing to address our fundamental problems”.

“ Consultant-level doctors in public health medicine have been ignored and disrespected for over 20 years and despite the recommendations of numerous Government-commissioned reports, we are still not acknowledged and employed as consultants,” she said.

“The Covid-19 pandemic has exposed the cost to society of not resourcing a consultant-provided public health medicine service. Our members can no longer accept a mixture of piecemeal measures and forgotten reports.”