Irish-built microgravity device to be blasted into space 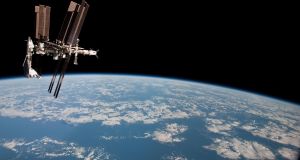 A scientific instrument, built and designed in Ireland, which will measure any tiny changes in microgravity during European scientific experiments planned for the International Space Station is set to launch on Saturday as part of a resupply mission.

The PayLoad Data Router (PLDR) system – manufactured in Dublin by an Irish subsidiary of the US multinational Curtiss-Wright Avionics and Electronics Group – is scheduled to launch at 5.36pm Irish time on board the Cygnus NG-15 resupply spacecraft SS Katherine Johnson from Nasa’s Mid-Atlantic Regional Spaceport at Wallops Flight Facility, Virginia.

An Irish company, Realtime Technologies Limited, based in Dublin, is the manufacturing partner to Curtiss-Wright, for some of the electronic assemblies in the PLDR.

“Ireland has produced electronic subsystems as part of international collaborations in the past, but this is the first time that an Irish company has been the prime contractor in the delivery of a complete system, from start to finish,” says Dr Bryan Rodgers of Enterprise Ireland, a member of Ireland’s delegation to the European Space Agency (ESA).

The Irish-made PLDR instrument will reside inside the ISS’s Columbus module; effectively the science laboratory on board for ESA. Once in place, the instrument will enable ESA scientists to precisely measure levels of microgravity on the ISS for the remainder of its lifetime in orbit.

One of the main reasons for the ISS to exist is to do experiments in microgravity conditions which are not possible on Earth. These range from testing how crystals grow in space to monitoring plant growth, and these are often very expensive experiments to run.

Up to now, the ESA has not had its own instrument capable of measuring changes in microgravity. This meant the agency was reliant on the goodwill of Nasa which already had microgravity measuring instruments on board, for use with US-led experiments.

The ISS orbits the Earth at an altitude of about 400km at 27,000 km/h, which offers a nearly perfect weightless environment for “zero gravity” science experiments to take place. However, for a variety of reasons, there is never perfectly zero gravity on the ISS.

“There are accelerations due to thrusters firing, orbital manoeuvres, micro-meteorite impacts, astronauts going on the exercise bike, and all sorts of fans and motors,” explains Danny Gleeson, chief commercial officer at Réaltra Space Systems Engineering, a division of Realtime Technologies. It has taken more than 10 years from concept to orbit for PLDR, which is quite long even for the space sector

“If some ISS manoeuvre happens during the middle of your very expensive experiment – it can affect the quality of the results,” says Gleeson. “You might be expecting it to be quiet, but suddenly it’s not quiet and you are not sure whether this is the experiment or someone on an exercise bike.”

It is crucial, when experiments on the ISS can cost in the region of €50 million to build, launch and run, that even tiny sources of microgravity changes on board are clearly identified so that experimental data is not compromised.

The PLDR is small, about the size of a vanity case. Inside, however, it has the advanced electronics required to measure and record microgravity. This data is then transmitted to communication devices on board the ISS via Ethernet and then transmitted back to ESA on earth.

It uses two types of accelerometers, which are highly sensitive scientific instruments designed to measure even the tiniest vibrations. One of these is a seismic accelerometer; an instrument capable of measuring ground movements from earthquakes on the other side of the world or even the local traffic levels around Dublin during the pandemic.

The PLDR is crucial to Europe’s scientific ambitions in space, and it’s vital that it retains its accuracy over many years. However, it will only be possible to fully test the instrument when it’s up on board the ISS.

It is expected that tests to evaluate the PLDR’s performance will take about one year with continuous data readout and evaluation on ground.