Private hospitals ‘takeover’ by State will not be extended past June 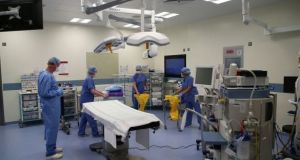 Staff at the Blackrock Clinic. The temporary State takeover of private hospitals has been criticised over costs. Photograph: Nick Bradshaw/The Irish Times

The Government controversial takeover of the country’s private hospitals is to end at the June in its current form.

The HSE has been mandated by the Cabinet to enter into talks on a new agreement with private hospitals to come into effect from July which would allow the State to take control of 100 per cent of their facilities if it was required to deal with any future surge in Covid -19 cases.

Separately the Government has instructed the HSE to engage with the private hospitals to secure ongoing access to private hospitals in collaboration with the National Treatment Purchase Fund (NTPF) to address essential needs including delays in public patients obtaining treatment.

In essence the State may seek to tackle the growing public hospital waiting lists - which will be exacerbated by the Covid-19 restrictions in the health system where fewer procedures are likely to take place - by ramping up the operation of the NTPF in the private hospitals.

However under the NTPF model, the State buys packages of care including private hospital accommodation and treatment for patients by consultants. The State does not employ the doctors concerned or own the hospitals.

Highly placed sources suggested that the State may seek to lease blocks of beds in private hospitals during the forthcoming winter months.

However following on from the Cabinet’s decision on Friday, traditional private practice in private hospitals will resume from the end of June when the three-month contract with the State formally expires.

Speaking after the Cabinet meeting the Taoiseach Leo Varadkar said the State took control of the private hospitals to ensure it had adequate bed, critical care and ICU capacity for the pandemic “so we wouldn’t see the scenes that we saw in other countries where hospitals became overwhelmed”.

Thankfully, he said, we didn’t get to that stage and didn’t need to use the private hospitals “to the extent that we thought we might”.

“But between now and then we will negotiate with the private hospitals a new agreement and our objective in that new agreement is to have step in powers if you like or step in rights to take control of ICU beds and critical care capacity and other beds if we need them, if there is a second wave that is worse than the first one or if we find that a second wave of the coronavirus coincides with a bad flu season in the winter,” he said.

The full details of the State’s new arrangement with private hospitals and the costs involved are expected to be worked out in talks over the coming four weeks.

The State effectively took over nearly 20 private hospitals at the beginning of April in the face of a potential surge of Covid-19 cases.

However the deal has been criticised over its cost and because significant numbers of beds in private hospitals remained unused.

Last weekend The Irish Times reported that the State had paid out €112.4 million to the private hospitals on foot of estimated costs submitted to cover the month of April and the first week of May.

It is understood the Cabinet was told that the bill for taking over the private hospitals for April, May and June is likely to be about €338 million.

However this is about €200 million less than the Government had anticipated it would pay to the private hospitals if the deal had run until the end of August as potentially provided for in the agreement.

A big question now is what will happen to the €200 million that has not been spent.

Some of it will, undoubtedly have to go to the private hospitals as a “retainer” or insurance policy allowing the State to take over their facilities if a potential second wave of Covid-19 emerges.

The State will also have to pay for the additional capacity in the private sector which the HSE will need to treat public patients in the months ahead. The NTPF was already set to receive a major financial boost this year with a budget of about €100 million.

While there is no Government agreement as yet, the budget for the NTPF could increase much more significantly again in the weeks and months ahead.